Our Red Rock RV Park neighbor, Chet and his wife, Chris, made a mistake when they bragged about the wonderful trout they were cooking on the grill last week.  I love good fish.


After a minimal amount of begging from me, Chet brought over a huge bag of frozen cutthroat and brook trout and shared his grilling recipe.  I thanked him profusely and offered to pay for the fish but he refused payment.

We kept the fish frozen until Saturday when we'd have plenty of time to cook and enjoy eating them.


The trout was delicious but could have fed a small army. We are, after all, just four old folks.  Marcella, Landon, Wayne and me -- along with our mutts, BJ and Lexie.


Mesa Falls
Sunday, September 4 is our last full day in Island Park near Yellowstone.  In addition to the National Park, there are several local sites I'd like to see.  While my com padres (Marcella, Landon and Wayne) were not interested in seeing Quake Lake, they do want to see Mesa Falls, a cooperative effort of Idaho State Parks and Caribou Targhee National Forest. It's a recreation area that begins at Bear Gulch and follows the Mesa Falls Scenic Byway and includes the Upper and Lower Mesa Falls.  Those falls are our destination today.  Once again, we're in two cars and taking a picnic lunch which we enjoy so much.

We'll travel along the Mesa Falls Scenic Byway that begins in Ashton, Idaho and travels through some beautiful farmland.  This is the "world's largest seed potato producing area" -- who knew?
The first stop on this day is the 114 foot Upper Falls. The Big Falls Inn, built between 1912 -1914 by Mesa Power Company (probably as an office building) is on the property just above the falls. A dam and power generation plan were planned back then but they were never built.  The area became a tourist attraction and the Inn became a stagecoach stop and hotel for travelers going to Yellowstone.  Later the Inn was used as a restaurant, then a dance hall and later, a scout camp. The US Forest Service acquired the property in 1986 and began restoration of the building in 1997. This is how it looks on our visit today.

Nice wooden walkways have been built around the falls area.  We strolled, took pictures and fielded questions about Lexie and BJ.  Everybody wants to "pet the puppy" it seems.  It's tough to tell the little kids that Lexie is too afraid to let them pet her. 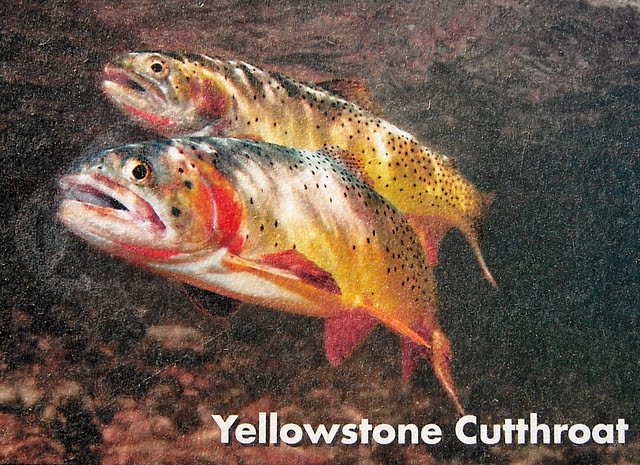 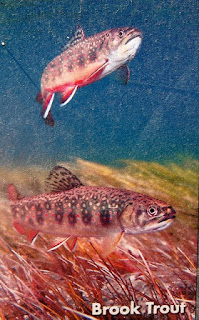 This area is part of Henry's Fork trout stream. Eating our trout dinner last night, I didn't know, but learned today that Cutthroat Trout are the only native trout in these Henry's Fork waters.  Brook and Rainbow trout were introduced in the 1880's.

After touring the Upper Falls, Wayne and Lexie waited in the shady car while I explored the historical significance inside the Inn (that's where I found the stuffed moose, a bear, porcupine and numerous other wildlife remains).  We ate lunch at a picnic table in the shade and then moved on to the Lower Falls -- just a short one-mile drive down the Mesa Falls Scenic Byway.
At the Lower Falls, we were attacked by very persistent flies so our visit was short.  Hitting the road again, we continued the Mesa Falls Scenic Byway to an area where we had a good view of the Grand Teton Mountains. Early settlers called this mountain range "Pilot Peaks". French trappers referred to it as "Les Trois Teton" or "Three Breasts".