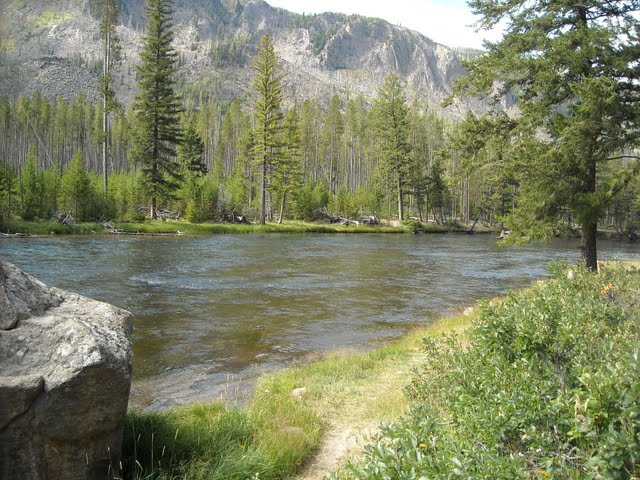 Established in 1872, Yellowstone National Park is America's first national park. Situated in the northwest corner of Wyoming, with some of Montana and Idaho included it is home to a large variety of wildlife including grizzly bears, wolves, bison, and elk. Preserved within Yellowstone National Park are Old Faithful and a collection of the world's most extraordinary geysers and hot springs, and the Grand Canyon of the Yellowstone.
My first impressions of Yellowstone were not really favorable.  I didn't know if it's because it is different than I expected or that Yosemite, Mount St. Helens and the Canadian Rockies had just been so spectacular.  The first sites at Yellowstone just didn't seem to move me -- whatever the reason.

Anyone who knows me knows that I'm on a mission these days to see a moose and I'd really like to see a grizzly bear too.  My eyes are constantly scouring the roadside for wildlife.  Within the first half-hour of our entry into Yellowstone National Park, we ran upon a small group of elk.  They aren't moose, but they'll do for now.  They're far away so I had to zoom in to even get them in the photo.  Oh well, the day is still young. 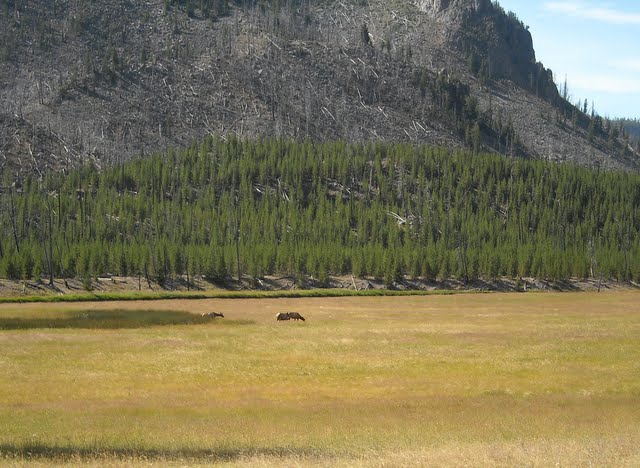 Driving on past the elk, still early in the day, we saw a group of cars stopped ahead of us.  We know this is an indication of wildlife close by.  Closing in on the congestion, we saw people with cameras already out of their cars.

Early this summer (2011) a man was killed and his wife seriously injured by a grizzly bear here in Yellowstone.  They were hiking in the back country and were not novice hikers.  The couple reportedly walked, accidentally, upon a mother grizzly and her cub.  I thought about the incident when we came upon this sign near a trail head no longer being used.

It wasn't long until we came upon bison #2.  Another solitary bull, resting in the grass. We're making a counter clockwise circle of the northernmost loop of the park.  The sites are still somewhat unimpressive to me but the day is enjoyable.

We drove past Roaring Mountain and on through the Norris community of Yellowstone at an elevation of 7,526 feet. A few miles farther and we entered the Caldera overlooking Yellowstone's Central Plateau.  I didn't know what a Caldera was and still have only a vague idea but it has something to do with an enormous volcanic eruption some 600,000 years ago (are they sure of that timeline?) that blew parts of the mountains all the way to Texas!  The plateau beyond the caldera continue to bulge and brew their mysterious magma fires that will eventually lead to the next eruption. Wayne says repeatedly that we're touring a power keg that could "blow" anytime.  I'm a little uneasy about this.

Our drive takes us to Canyon Village and some really nice views of the Grand Canyon of the Yellowstone.  The scenery has become much more striking and taking photographs of the canyon has become a thrill.
The orderly vertical columns along the canyon wall are volcanic. A gazillion years ago, the lava welled up and then flowed as a flood of fire. Upon cooling, the lava remains contracted producing hexagonal columns of basalt.  All this, mind you, took place 1.3 million years ago according to the information in the brochure.  How do they know this stuff? 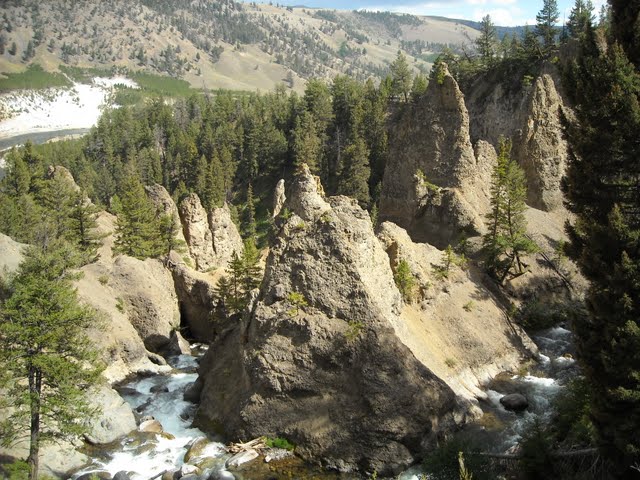 At Washburn Hot Springs Overlook, I took a walkway that led to beautiful scenes of Yellowstone's Grand Canyon. Wayne and Lexie waited in the car while I walked and took pictures. 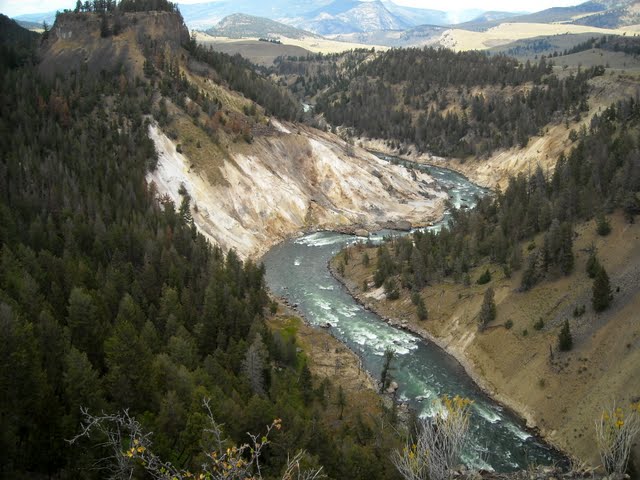 We passed Mount Washburn at 10,243 feet and drove northward to Tower-Roosevelt where we picked up a quick snack for supper and took a look at the nearby Petrified Tree which was most unimpressive. Just a column shaped rock standing straight up 20-30 feet.

At the Forces of the Northern Ridge, we saw a group of riders on horseback.  It was a hot afternoon and I wondered if they were enjoying themselves.

This area is known as Forces of the Northern Range and it looks different from the other parts of Yellowstone we've seen today.  The 5,200 - 7,000 foot elevation is less than any other part of the park. Rainfall, at 15" annually, makes it the driest part of the park too.  The winter winds and sun amounts make this the best grazing part of the park and reduces snow depths.﻿
Mammoth Hot Springs at the Albright Visitor Center near the North Entrance of Yellowstone was next and this stop certainly did not disappoint.  This is where the Mammoth Hot Springs Hotel, Historic Fort Yellowstone and Park Headquarters are located.  Additionally, elk frequent the yards and flower beds, which are draped in chicken wire to save the blooms. 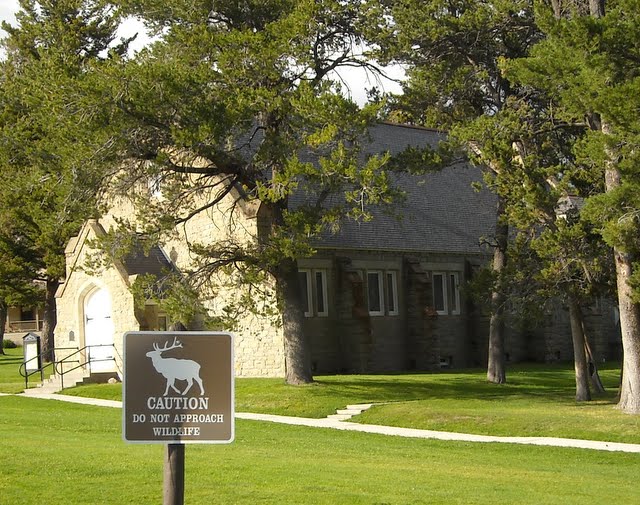 Just down the road we came upon the Hot Springs themselves.  Oh, they are terrific!


As the afternoon was slipping away, we made better time after Mammoth Hot Springs, stopping just once or twice more. We did catch some beautiful sites though...

I don't remember the name of the place we stopped last.  It might have been Steamboat at Norris Geyser Basin. We were tired by then and Lexie walked a long time before she took care of business. 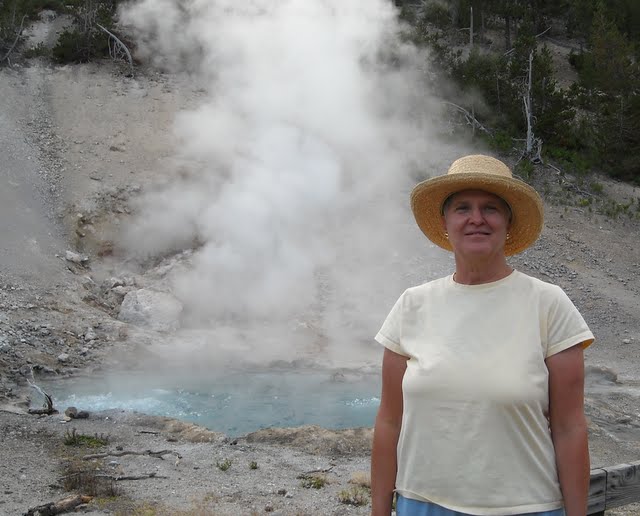 It was almost dark when we got back to the campground and we were three tired dogs!
Email ThisBlogThis!Share to TwitterShare to FacebookShare to Pinterest