Today's plan was to take in the large southern circle of Yellowstone National Park. This route would take us through the Geyser Basins and around the edge of Yellowstone Lake, by Fishing Bridge and then north along the Yellowstone River before we'd return on a part of the route we'd already taken in our northern loop excursion a few days prior.

Because we have furkids (and BJ is a big furkid) we took separate cars. We also packed lunches. It's great to be with friends -- even if you don't ride together!
We pulled into the Yellowstone Information Station at Madison so the dogs could take a walk and Landon could get his National Park book stamped. We ran upon one of these great old tour buses.

The Nez Perce War
I don't ever remember reading anything in school about the Nez Perce War of 1877.  The name of Chief Joseph was just vaguely familiar. We stopped along the road for a short "refresher" lesson of the event. It goes like this: In August 1877 (after the civil war) some 600 Indian men, women and children camped in this area. They were making their way to Canada from their Oregon homeland which had been taken by the US Government (sounds familiar). US Soldiers were close behind.  The US government had declared a "non-treaty" against the Nez Perce and pursued them to be forceably placed on a reservation. This elderly group of Nez Perce, led by Chief Joseph and several others traveled 1,170 miles and were just 40 miles short of reaching the Canadian border when they were captured.

This western part of the circle takes us through the Geyser Basins and inside the Caldera Boundary. I've learned more about how the Caldera effect works and it's reminiscent of baking a cake.  If the cake rises but is taken from the oven too soon, it will "fall" and leave marks on the surface. Same principle with the Caldera.

Approaching the Geyser region, we saw the first signs of coming attractions: 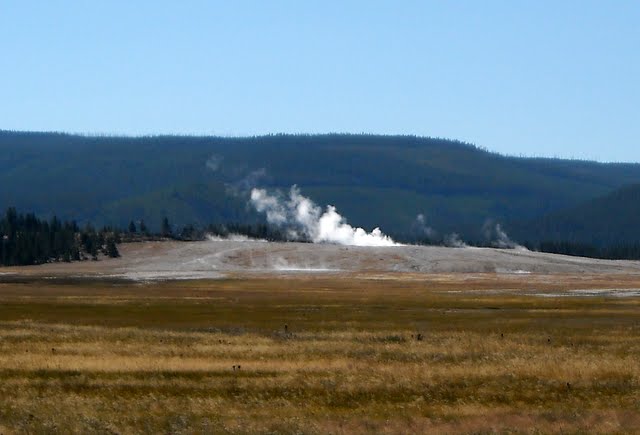 We stopped at the Lower Geyser Basin's Fountain Paint Pots for these pictures: 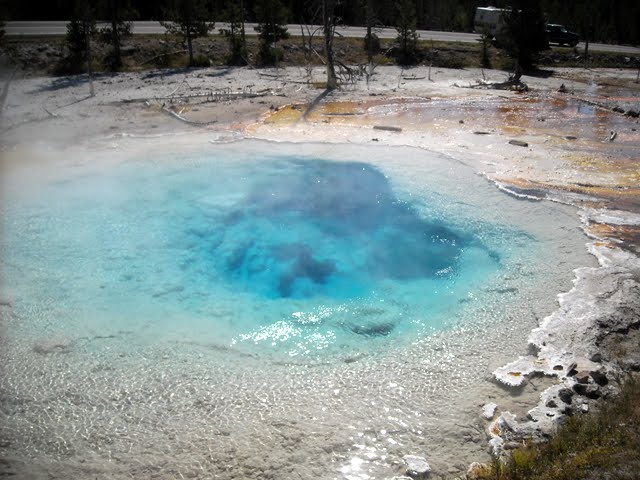 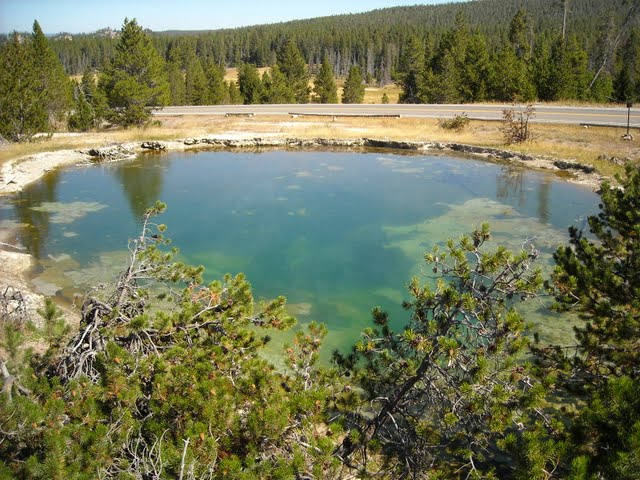 We stopped for lunch at a picnic area and found yet another lone bison bull grazing. 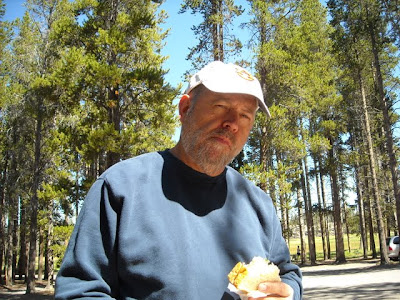 After lunch we made one more stop -- this one at Midway Geyser Basin where Wayne announced that he was "all geysered out" and opted not to take the lengthy walk to see more boiling water.   I took the walk while he and Lexie stayed in the car.


Next Stop:  Old Faithful
Gift Shop, Ice Cream, Bathrooms and Old Faithful.  Our activities included all of these in addition to being with good friends. BJ stayed in the car, but Miss Lexie rode in her Outward Hound to see the eruption of Old Faithful. 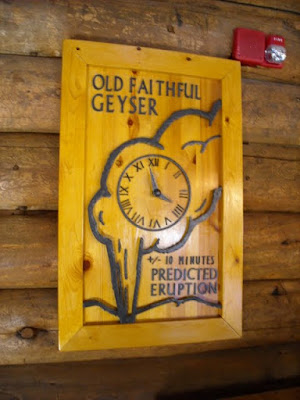 Shopping for souvenirs, we missed one eruption of Old Faithful and shopped another hour until near time for the next one -- they occur every 92 minutes.


Thar She Blows!
Because it was so late in the day, we all decided to just backtrack to West Yellowstone instead of trying to complete the remaining  half of the southern circle drive through the park.

We stopped at the park sign to snap a photo of ourselves as we left.

The next day, Landon told me he heard on the news that someone had been killed by a bear in the park the day we were there.  It happened near where we were.

Moral:  Yellowstone can be dangerous.