From Bella Terra of Gulf Shores, Foley, Alabama      The neighbors beside us here in the temporary RV site have a Mustang convertible that they keep under a canvas cover when they aren't here.  Richard, the neighbor, calls it his "fun" car.

I didn't realize it but the Wayner was developing a secret desire to have a "fun" car too and seeing Richard's Mustang intensified it. He confessed to me a couple weeks ago when he saw a red Mustang convertible with a "For Sale" sign in the window out on Highway 59 in Foley. He stopped. He looked... but the red Mustang didn't meet his stringent standards......

So.... we began looking for pre-owned convertible makes and models online. I helped him with research of convertibles. We looked at everything from TrueCar to Carfax to Car Trader to dealer sites to Craigslist. He broadened, then narrowed his convertible car choices to Ford Mustang, BMW, Lexus and Mercedez Benz. He prepared a list of pre-owned convertibles for sale in the area. Last Monday we drove to Mobile to see a Benz, Lexus and Mustang. Tuesday we drove to Destin to see a BMW. Wednesday was Pensacola Day where he checked another Mustang, another Lexus another Mercedez Benz and another BMW. It was hot and tiring work, but we kept going, Lexie and Ozzie in tow every mile.

Thursday was a day of rest from the physical car search, but not from the mental one. He doubled down on his research and made more phone calls.  By Friday evening, he had decided on the BMW he saw in Destin. Of course, that would be the car.... the farthest distance but it was a good price, with low miles and in fine condition. It's a 328i hardtop convertible. He bought it from a widow from Birmingham, now living in Destin. Strike up yet another Craigslist success story for us.

Here we are, about to go topless. 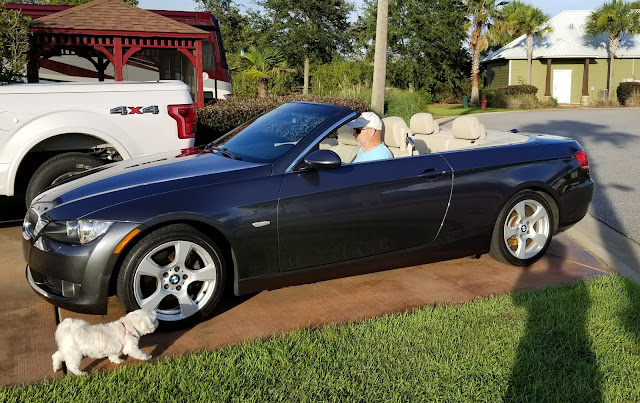