From Bella Terra of Gulf Shores, Foley Alabama          Framing of the casita began on Friday, July 7th, four days after the concrete pour. We signed the casita building contract with David two days earlier, July 5th. The contract was drawn and approved way back on June 16 -- before my angry outburst described in gruesome detail on an earlier post. I guess everyone was afraid of me -- with good reason. Nevertheless, we are all legally bound to proceed with this endeavor now.

After a great deal of urging from me, David reduced the fourteen week construction period to twelve... though I know that deadline really is not likely to be met. 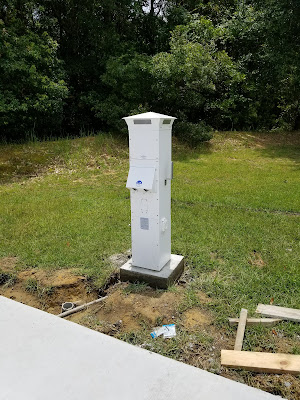 The power pedestal wiring was inspected on Wednesday, July 12th and we established the first utilities account we've had in seven years. (Insert icky face here)

Our typical pattern for watching the construction process is to take a ride over in the golf cart after dinner every evening, after the workers are gone. As I do love seeing construction, this is sometimes difficult for me...

We were "weather lucky" through the first two weeks of framing. Fast moving showers come almost daily but we didn't have any complete wash-out days until Monday, July 24 when a long train of thunderstorms lasted from before dawn until lunchtime. In early afternoon, some clearing came and progress continued.

David continues to feel the project is moving along at a good pace and despite the daily showers, we aren't being washed out.  This concludes the casita framing post. Next, we'll watch the metal roof, doors and windows go in.