From Spanish Trails RV Park, Moab, Utah       After leaving Monument Valley, Wayne and I spent four nights at Blue Mountain RV Park in the tiny Utah town of Blanding. The campground was quiet and our site had grass and shade. We recovered from the muddy mess we'd endured at Gouldings. With just one night remaining before our trip to Moab though, the campground was booked for a rally so we were forced to leave a day earlier than our next reservation. We would stay one night at Moab KOA and join our group the following day. 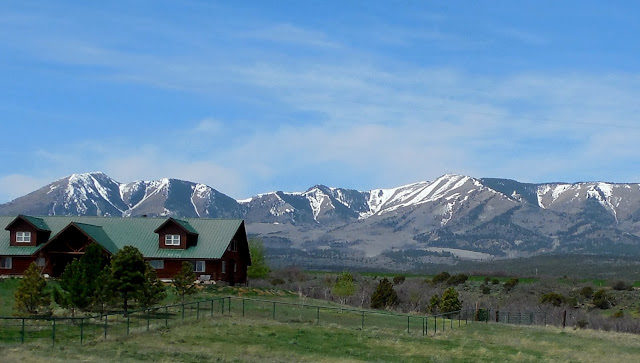 The site at Moab KOA didn't accommodation our 43 foot coach. Naturally, I complained, a constructive criticism that I hoped would help, but the mere mention of being displeased was met with a snicker from the staff. 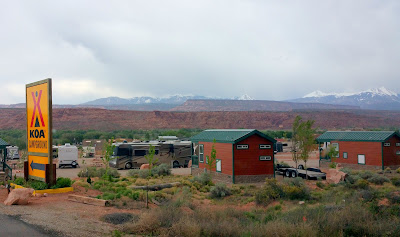 Next morning we moved to our reserved site at Spanish Trails RV Park. Coming into the park,  I saw our friends from Chula Vista, Bob and Penny. Joyce, Charlie, Pam and Ernie were on their way from Bryce Canyon and I was preparing a get together at our coach in late afternoon. Bob and Penny had some free time and would join us. It was a good start to the reunion of friends except that Pam and Ernie had scraped the awning rail of their coach on a tree as they left Bryce Canyon. Exhaustion and frustration showed on them that evening so we left them to relax while Joyce, Charlie, Wayne and I drove into Canyonlands National Park the first day.

There are three distinctly different districts to Canyonlands. Because our time at Moab is limited (just 3 nights / 2 full days due to an off-roaders rally) we would see just one of the districts: Island In the Sky, situated in the northern portion of the park. The other two districts are The Maze and The Needles. We will just have to keep those on our bucket list for another time.  From Moab, Islands In The Sky visitor center is 32 miles. It's 76 miles to the Needles visitor center. The Maze district is accessible only by four-wheel drive and requires great self-sufficiency. We are not all that self-sufficient.

So Joyce, Charlie, Wayne and I took the 32 mile ride to Canyonlands. Before reaching the visitors center, we found photo opportunities, like this overlook along Highway 313 just past Intestine Man, where Joyce and I explored while Charlie and Wayne waited in the truck. We would also miss seeing Dead Horse Point State Park and Horsethief BLM area, both passed along the route to the visitors center. 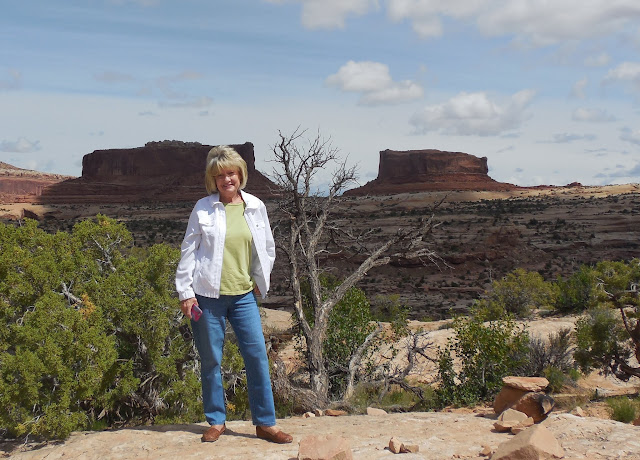 Probably because of the proximity to Moab, the Island in the Sky district of Canyonlands National Park attracts about 60% the majority of park visitors. Needles gets about 35% of the Canyonland's visitors. The Colorado and Green Rivers inside Canyonlands along with the remote Maze district, each account for 3% of the park visitors.

After our brief visitors center stop and the overlook we explored all the drivable roads, stopping at all the overlooks and we took dozens of pictures. We didn't hike to Mesa Arch though and much to my disappointment, my head ached almost all day. Because of it, I didn't spend much time with the map to take note of the different stops. I can't name the views in the pictures below
. 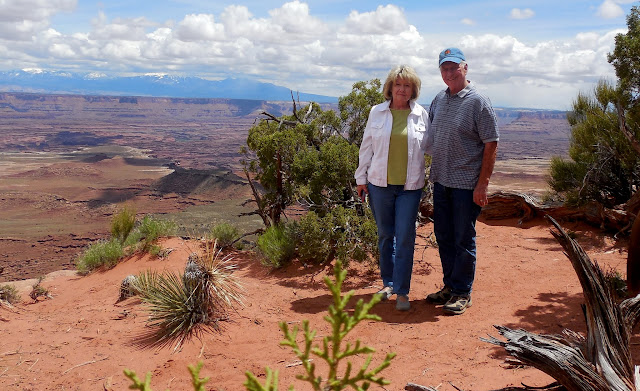 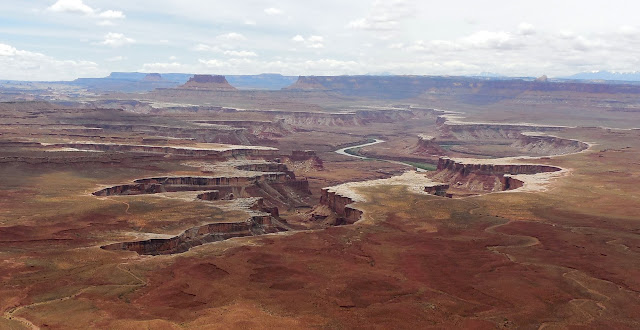 All of Canyonlands National Park, not just the districts we didn't see, must stay on our bucket list. Two days just isn't enough to see all there is here.  We must return for a longer time and to take some of the hikes. A note for future visits though.... there are no eateries at Canyonland, so we will take a picnic lunch (and aspirin) for sure.
Email ThisBlogThis!Share to TwitterShare to FacebookShare to Pinterest