Yuma: Names In The Desert

From The Palms RV Resort, Yuma, Arizona       During the Elks fried chicken dinner, our group of eight made a plan to go off-roading and, of course, named Landon and Marcella as our guides. Next morning we all met at the nearby Circle K at 10 o'clock and headed out.

The area we visited is on Fort Yuma Indian Reservation property on the California side of the state line. Wayne and I remembered going to this location with Marcella and Landon for our first Arizona off-roading experience back in February 2011. The sun is beautiful and the temperature is warm enough for a single layer of clothes -- mid 60's I believe.


Marcella and Landon, and BJ their beagle, led the way in their white Jeep Rubicon, Wayne and I, with Lexie and Ozzie, followed in our Ford 4x4 pick-up truck. Ernie and Pam fell in after us in the red Jeep Wrangler Sahara and our new friends, Suzi and Jim in their Jeep Wrangler that served as the golden caboose.


Not ordinarily off-roaders, Wayne and I had to take a few minutes to read in the Ford owners manual to know which 4-wheel option to use for today's terrain. We were apprehensive, to say the least, about taking our "still new" truck out into the wilds of the Arizona desert. Despite a few minor scrapes from some low brush, I think we did okay.


We all survived the first hill but it did take several tries for Jim and Suzie in the Jeep Wrangler and we all had a great laugh at the enthusiasm Jim showed in trying, and trying, and trying again. After a good long running start, the Golden Caboose bounced all the way up the rough and curvy hill.


Coffee was spilled all over the inside of Jim and Suzi's Wrangler when they finally stopped at the top of the ridge. Jim's white t-shirt was spotted light brown from coffee.

We rode along the ridge for a good while, catching glimpses of the round top of Castle Dome and Picacho's jagged peak in the distance. Landon uses these and other landmarks to find his way around out here. The scenery was spectacular!


After some time, Landon and Marcella led us off the ridge and into what I call a "wash" area, where the sand was soft and we could feel a difference in the way the truck handled. 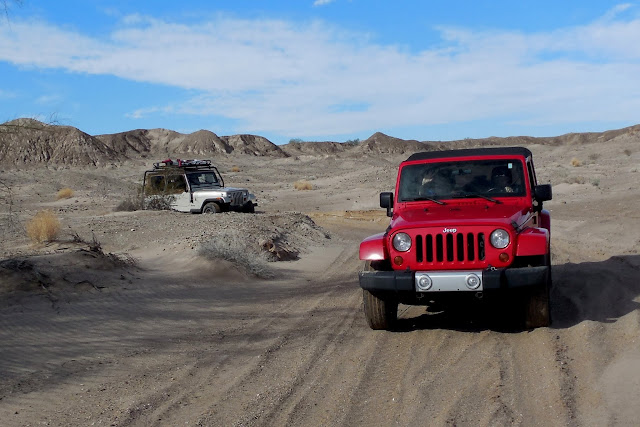 Deep in the wash area, we stopped along a length of earth's edge where other visitors had carved their names, dates and initials into the hard dirt wall.  We all did the same.

By the time we finished carving our names into the dirt wall, we began thinking of a place to enjoy the picnic lunches we had brought along.  Landon and Marcella led us out of the wash and up to an area under a stretch of power lines. This is where we had such a hard time corralling our little Lexie in 2011 and it is where Landon took Wayne and me up the hill and then back down in the Jeep Liberty. We reminisced about it for a minute and then.....


Anyone who knows Pam, knows she has a fear of heights, particularly heights with drop off edges. Without thinking, Ernie, enthusiastically accellerated toward one of the trails leading to the ridge. Pam was taken completely by surprise and did not enjoy the experience as she couldn't have known what lay at the top of the ridge.  I think it took the rest of the afternoon for her to recover.  It all happen so quickly, I didn't get a video of Pam and Ernie's run up the hill.  The return downhill was much more subdued.

Now for lunch. Vehicles were arranged in such a way as to block some of the desert breeze.  Chairs and lunches were placed in a circle of sorts and we rested, ate, drank and laughed.  The air temperature began to drop and finally fell to a chilly 59 degrees.

After lunch, we headed into the area known as Names.  It's not on the map and it would be futile for me to try to explain the location, but it's a space of maybe 20 acres of desert land where visitors use large stones to write out their names or special messages.


I read somewhere that this area was used by General George Patton for training soldiers for service in the deserts of Africa during WWII. The Desert Training Center, California-Arizona Maneuver Area (DTC-CAMA) located here, was created in 1942. This simulated theater of operation was the largest military training ground in the history of military maneuvers. It has been said that even during those days, soldiers spelled out their names and the names of girlfriends with rocks out here.  Makes for a good story whether it's true or not. 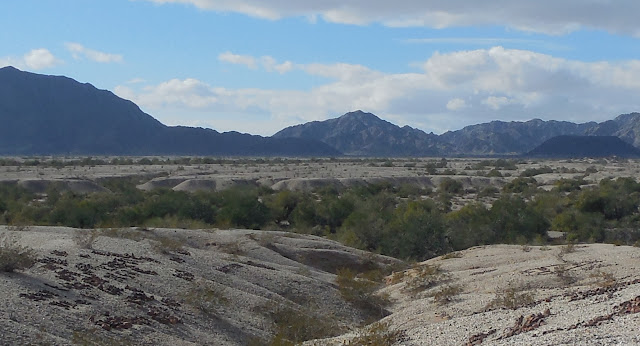 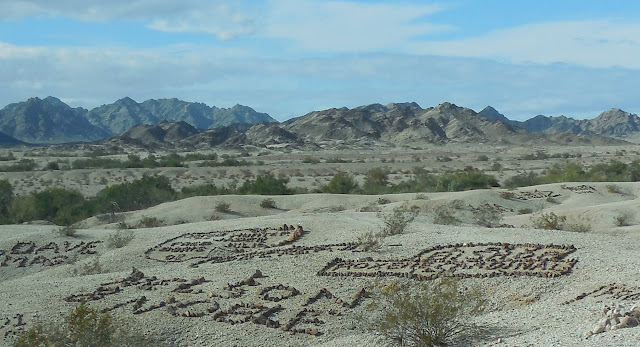 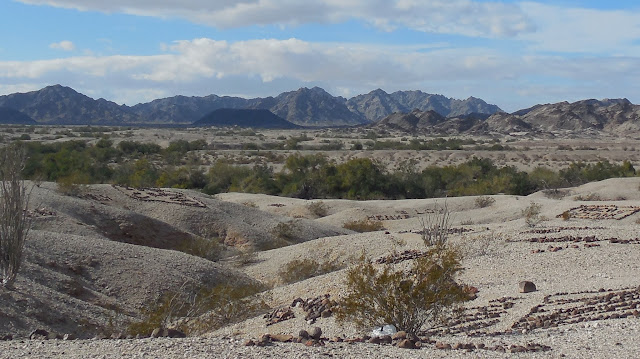 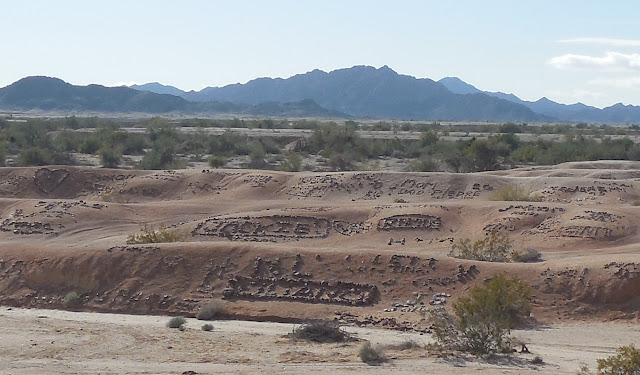 We returned to cross the Colorado River again around 3 o'clock and then made our way back onto the asphalt roads. Several of us, myself in particular, wanted to make a quick run to one of the local date farms to try a date shake. We all agreed to go. 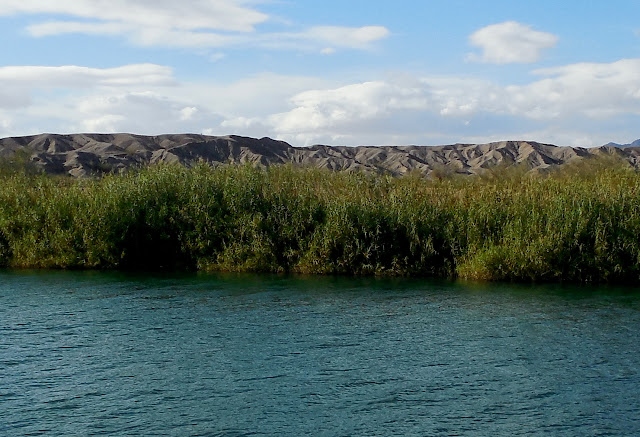 I'll save the pictures and detail of the date farm part of the afternoon for the next post.