From Outdoor Resort Palm Springs, Cathedral City, California    From Wednesday, January 20th until Saturday, January 30th, while Pam and Ernie were at San Bernadino, Wayne and I relaxed at Outdoor Resort Palm Springs.  While we missed our travel partners, we hoped they were enjoying time alone and visiting the Los Angeles area. Meanwhile, we had sunny weather every day with afternoon temperatures in the mid 70's.

The folding bicycles and dog carrier came out of the truck by Day 2 so Lexie and Ozzie could enjoy some outdoor time. Every day we took bike rides through the campground.

Nearly everyone here has a golf cart -- with good reason: more than 1,200 sites spread among 27 golf holes make for a pretty large area to explore. In this good weather, a golf cart, along with the bicycles, will get us out a bit more. I began looking for a rental cart on Thursday after we arrived, but it took until Monday to find one at Golf Carts of the Desert. They agreed to deliver it by 2 p.m. the same day. Cost was $325 per month plus tax, pro-rated for January plus $25 one-time delivery and pick-up. The cart arrived early in good condition.

Desert Memorial Park is a Palm Springs Cemetery District graveyard that's located across the street and in the next block from Outdoor Resort Palm Springs.  Wayne learned that several well-known entertainers are buried there. One afternoon we drove by to see grave markers of a few of them.

Frank Sinatra is buried at Desert Memorial Park alongside his mother who died in a plane crash near here. The day we visited, an empty Jack Daniel's bottle was on the headstone (hard to see) along with some other mementos and a few coins. Two American flags and several bouquets of live flowers had been placed on the grave. Wayne said packages of cigarettes are often left there too.

Many of the headstones in this cemetery are barely legible. Strangely, they are made in an unusual fashion for a desert setting: Raised lettering instead of engraved. Wind blown sand has etched away many of the writings. Wayne and I both wondered why anyone would choose that particular type of identification on a headstone.  In a few years, Frank Sinatra's headstone will be completely illegible.


The flag and pole Wayne bought at Quartzsite was a project for an entire afternoon. He and I spent hours on the ladder attaching the brackets, which we never got aligned to suit him. While he became discouraged at the installation, I did not and I think we will enjoy flying the flag and using the solar light for nighttime.

Another day we drove into Palm Springs and a few other surrounding areas, finding the subdivision in which President Gerald Ford and his wife, Betty, lived near Thunderbird Country Club. Naturally, the home was protected from the prying eyes of tourists by a gated guard house.

We spent time another afternoon looking at new Newmar coaches but not feeling the urge to buy. We also came upon an area of giant wind energy machines (killers of great numbers of American eagles, I'm told). The ones we saw today killed nothing as they certainly were "on strike" --  not a one was turning. 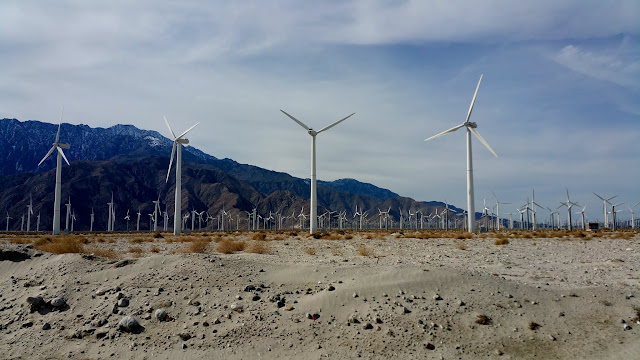 With putting and chipping greens readily available for practice here at ORPS, I spent an afternoon working toward improvement in both areas.  While my putting was okay, my chipping failed miserably today. I promised myself to practice more.

Golf in this area is plentiful and not terribly expensive... especially now with the exchange rate so unfavorable for Canadian visitors, many courses are drastically discounting play. 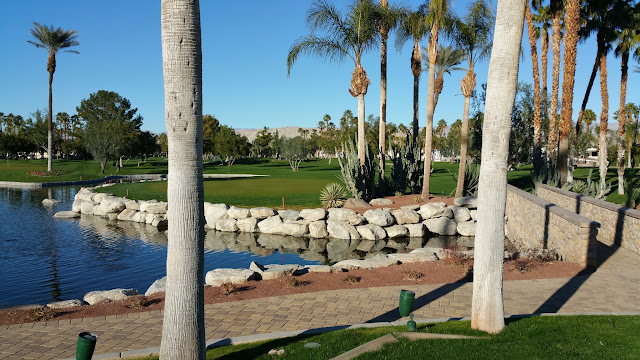 These three pictures are taken from the putting and chipping areas here at ORPS. I continue to love being here and will, no doubt, encourage Wayne to return to this resort area next winter.


These and other housekeeping chores kept us busy during the first ten days here at Outdoor Resort Palm Springs. On Saturday, January 30th, Pam and Ernie joined us for February. We missed our friends and are glad to have them near us again.