Spring Lake RV Resort, Crossville, Tennessee    Our 2012 Ford Edge was already overloaded when we bought two sets of golf clubs last February. In the rear we carry two folding bicycles, a bicycle-towed carrier for the dogs and a dog stroller. The back seat is reserved for Lexie and Ozzie and their "car riding" paraphernalia. There was simply no place to put two sets of golf clubs so they've been shifted from the car's back seat to the coach basement and that gets old real quick. It was only natural that we began thinking about buying a larger vehicle.

But trading a towed vehicle is complicated and expensive.  Weight consideration, towability, braking, base plates and electrical systems all to be considered.  Nevertheless, Wayne had been researching trucks and large SUV's for awhile now and the time came to trade. We chose Ford's F-150 Lariat pick-up. The truck's weight and safety ratings played a big role in making this choice.

We looked on TrueCar.com which I can say now, wasn't much help but generated a bunch of unwanted telephone calls, voice mail messages, email and texts from a variety of dealer sales reps that nearly drove me to the brink. I finally delved deep into the bowels of TrueCar.com and found an obscure page that allowed us to "opt out" of sales contact.

On Tuesday, June 30th, we bit the bullet and drove to East Tennessee Ford here in Crossville. We were greeted by a very young but well-spoken Derek Cooey who showed us the truck inventory, took us for a test drive, listened while we talked about what we wanted and answered all our questions.  Derek's product knowledge was impressive and he has a customer service attitude. I'm not often impressed with sales people, but Derek was the exception and I liked his "style" or maybe the lack of it.

Transit took all day, Wednesday, July 1st, so we waited until Thursday, July 2nd to take possession. The owners of the campground allowed us to store the bicycles, wagon and golf clubs in their maintenance shed while we swapped vehicles and got the truck ready for hauling.

Once we'd taken delivery of Larry, we ordered accessory items including a hard shell (Tonneau) cover, a bed rug, rubber floor mats, window wind deflectors and a hood wind deflector through East Tennessee Ford's parts department. "What" you ask, "is a bed rug?" It's a carpet bed liner. It will protect the equipment from sliding around in the truck bed and will also protect the truck bed from scratches. I hadn't known such an item existed. It will be perfect for our needs.

Delivery of the accessories would take just a couple of days so we planned to return Monday, July 6th for installation. On Monday, however, we learned the hard shell Tonneau cover would take several weeks after all. Uh oh. After some discussion, a cover was located and diverted to East Tennessee Ford. It was expected to arrive Wednesday, July 8th so we scheduled Thursday, July 9th at 9 a.m. for installation.

On Thursday, July 9th, we arrived for accessory installation but soon after Wayne developed a "feeling" that things were not going smoothly. I'm not suggesting that Wayne is psychic, but when he has a "feeling" there's usually a reason. As usual his "feeling" proved to be well founded. Our new truck was moved to one side and a really nasty, sand-covered, one-piece, hard plastic bed liner (that had been lying on the ground) was tossed into the back. Horrors. Without apology the service personnel hurriedly pulled it out of the truck bed -- but it was too late. Scratches and black marring were left all over the beautiful platinum white paint. Wayne began trying to wipe it with a damp paper towel. I was furious, heartbroken and getting nauseous.

Adding insult to injury, no one at East Tennessee Ford's service department seemed to be managing our appointment. I went inside the dealership to look for our salesman, Derek, who arrived quickly, apologized and set about trying to get the service appointment on track. No one except Derek seemed to have known we had ordered a bed rug. The Tonneau cover was not there and couldn't be located (we were told anyway). It was like the guy at the parts window had never laid eyes on us until that moment.  My heart just kept sinking.

The wide-eyed, know-nothing man at the parts desk stared blankly as I complained about the damage to our new truck, then directed me into the service bay where I complained again -- this time to a man named Jim who was apologetic. I told him I wanted the scratches and marring in the truck bed buffed out. He said it could be done when the wind deflector installation was complete. Mind you, Jim, didn't offer to have it buffed out, I demanded it... but he did agree without arguing at least.

When the window and hood deflectors were installed, the bed was buffed and some two hours after arrival, it appeared we were finished for the day -- without the bed rug or the Tonneau cover which appears to have disappeared into a great black hole. Someone from the service department brought the truck around to us. I looked inside to find sand and dirt dumped onto the carpet and the new rubber mats were laid on top of it all. Horrors... again. Will my aggravation never end? Who trains these people? Can they not see that our truck is new and clean? Do they not know the price of a new vehicle? Did they not care that we were already frustrated at this service? Will this experience never end?

With the bed rug and Tonneau cover yet to be installed, we left the dealership with a promise that the truck carpet would be vacuumed when we return tomorrow. The bed rug is ready for installation but can't be done until a cover is installed to protect it from the elements. On Friday, July 10, the cover arrived, we were told, but was damaged. Nothing surprises me now. On Monday morning, July 13th, Wayne received a call with instruction to bring the truck in for installation of both the bed rug and the Tonneau cover that had just arrived.

By days end, the horrible parts and service experience appears to be finished. The dirt was not vacuumed from the carpet but we did that at the campground. The truck's bed lights were covered over by the bed rug, which Wayne had expressly asked to have cut out. We did that at the campground too.  Our parts and service invoice totaled $2,700 for the Tonneau cover, bed liner, wind deflectors, floor mats and installation of it all. Before the purchase, we were quoted prices that reflect a 10% discount on parts and labor but we can't be sure as it isn't reflected on the invoice. 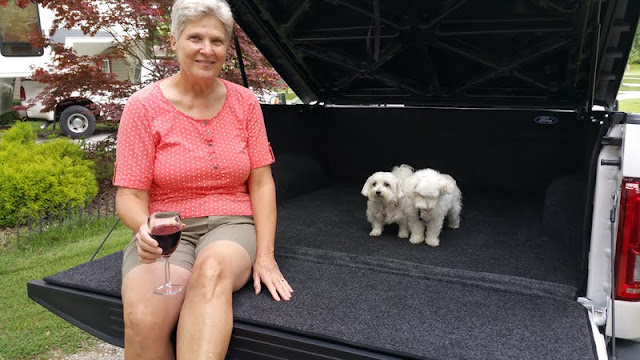 We really love the new truck and all the accessories have personalized it to suit us perfectly. As usual though, I'm left wondering how customer service can possible ever get to this low point.

I can hardly wait to complete the customer satisfaction survey. Or maybe I won't even go to the trouble.
Email ThisBlogThis!Share to TwitterShare to FacebookShare to Pinterest