From Spring Lake RV Park, Crossville, Tennessee   It's been almost eleven full months since our last real "first visit" tourist excursion. In early August 2014, while in Washington State, we visited Mount Baker. Within a few days though, our tourist life was interrupted. We made a long drive home to Alabama to be with my brother, who was very sick and has since passed away. The entire autumn would be spent near him. When we did leave Alabama, we went almost directly to our winter destination. While there, we didn't do much in the way of touristy things. Instead we spent our time playing golf and visiting with friends.

Today, however, we dug out our tourist hats and made a 40 minute drive southeast to Dayton, Tennessee. Neither of us had ever been here though we lived in Tennessee for many years and knew the story that made Dayton famous. 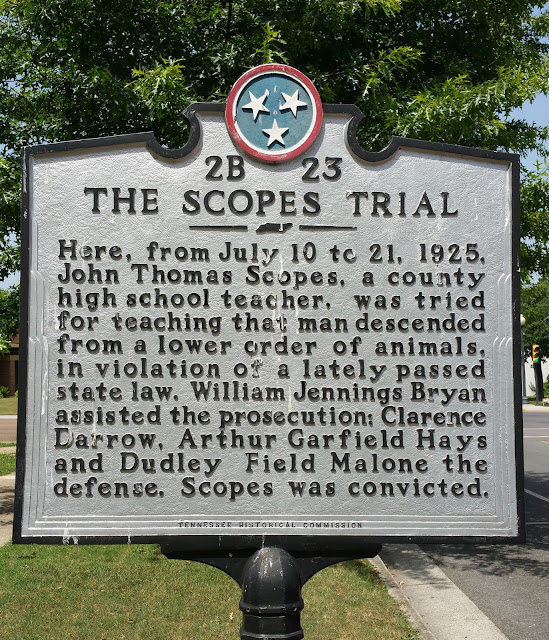 A small documentary style museum of the Scopes trial is on display in the basement of the Rhea County Courthouse. Enlarged photographs are the primary items on display.

Superstar lawyers Clarence Darrow and William Jennings Bryan argued opposing sides in an ACLU staged legal drama designed to pit Christianity against creationism in the courtroom as a local high school teacher began teaching Charles Darwin's theory of evolution . The flamboyance of the attorneys brought the case to national attention.   For a full chronology of events leading up to the trial and some other little known facts, an interesting read can be found at this National Public Radio (NPR) link.

Ten thousand visitors converged on tiny Dayton to watch Darrow and Bryan battle over science, academic freedom and the Bible during the eleven day trial of Scopes.

In 1955, a play by Jerome Lawrence and Robert Edwin Lee debuted entitled Inherit The Wind. It fictionalized the Scopes Monkey trial. In 1960 Stanley Kramer directed actors Spencer Tracy and Fredric March in the film adaption of the play by the same name. The film was nominated for five Academy Awards but was not historically accurate.

The title, Inherit The Wind from both the play and the movie is taken from Proverbs 11:29, "He that troubleth his own house shall inherit the wind and the fool shall be servant to the wise of the heart."

Scopes was found guilty in "State of Tennessee v. Scopes" but the decision was later overturned.

Lexie and Ozzie visited Dayton and the Rhea County Courthouse with us and toured the facility in their stroller. After the tour, they explored the grounds.