There's a sweet little family owned campground in Crossville, Tennessee where we stop occasionally to rejuvenate ourselves. Pat and Leroy at Spring Lake RV Park are such nice folks and we look forward to visiting with them.  Our stops are most often in the fall as we make our way to see family in middle Tennessee.

During our stay in October this year we found ourselves in the midst of a rally of Prevosts, Marathon, Newell and Bluebird coaches.  Fall in east Tennessee is busy with leaf peeping tourists and most of the campgrounds are hosting fall foliage rallies.

While here, I restarted my daily walking.  I enjoy the early morning walks and sometimes remember to put a camera into my pocket.   Here's an early morning shot of our coach from across the small campground lake.

The stop at Crossville turned into a month-long visit while we watched summer turn to fall with at least two nights of temperatures below freezing . It was so cold, in fact, that we had to disconnect the water to prevent lines from freezing.

Finally at the end of October, we traveled west from the Cumberland Plateau to Murfreesboro where we'd get in a few family visits and take care of our annual health checks.


The middle Tennessee visit lasted about two and a half weeks. During that time Wayne got to spend time with his sons and three of the five grandchildren. Our medical and dental appointments went well and we're blessed to begin another year of good health.  We established a relationship with a new dental group and found a veterinary clinic we like well enough to call Lexie and Ozzie's "home" vet.  Ozzie made two visits there as his anxiety seemed to be getting worse.  We tried using some anxiety medications but after a few days, discontinued it.  Wayne and I believe the noise of acorns hitting the coach roof in the campground (directly beneath an oak tree) set off his nervousness. Sure enough, it got better once we were gone.

I spent a day or so visiting my brother while my sister-in-law was hospitalized. Fortunately, she was stabilized, released, and expected to make a full recovery.  More blessings.

Mid-November we left middle Tennessee but not before we managed to damage Endie (the coach). Noticing one of the rear tires was flat, Wayne aired it and drove to a large tire repair center where the air stem was found defective. Backing out of the bay without assistance (bad idea) he connected with a large tire service truck. That's gonna require some body work. 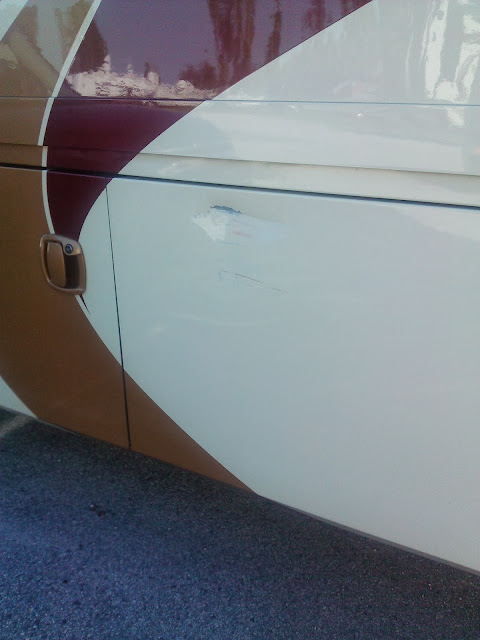 As if the body damage wasn't enough, the very next day the automatic step motor died leaving the steps flailing uncontrollably while the motor made a wretched grinding sound.  We tied the two steps together and limped south out of Tennessee.  We'll stop at Alliance Coach in Wildwood, Florida for these two repairs plus anything else we manage to break between now and then.  The broken steps did present a huge difficulty getting in and out though, so we stopped in at Camping World to see if we could get the motor changed. Not a stock item, they couldn't repair the step in less than a few days, but did notice we had a leaking hydraulic line so we added that to our ever growing repair list and continued southward.

Our next destination, however, will be Auburn, Alabama where we will do a bit of tailgating. Auburn's football team is having a surprisingly good season after such a miserable one last year.