Lee and Jackson: The Lexington Connection

It's Christmas already and I continue to fall farther and farther behind in keeping this journal.  I could kick myself for not keeping up, but my "writer's block" continues and there's no point in trying to write when the words won't come. Let me try again to jump-start...

We spent a few days in Lexington on our ride south during the last few days of September...

Back to this post after refreshing my memory with notes and photographs:  Lexington, Virginia was settled in 1777.  It is home to Washington and Lee University and Virginia Military Institute, the latter being raided, shelled and burned during the Civil War.
Two of the best known Confederate Generals, Robert E. Lee and Stonewall Jackson are buried at Lexington.

The George C. Marshall Foundation is here as are at least seventeen locations in this quaint little town on the National Register of Historic Places.
﻿

Before its formation as an institution of higher education, VMI’s site was occupied by an arsenal of some twenty young and undisciplined soldiers.

﻿﻿In late 1839 however, those young Virginians were mustered into the service. On a cold snowy November day, the first cadet sentry relieved the old arsenal guard. Cadets continue to perform guard duty and serve the State as a military corps, just as the first Corps of Cadets did.﻿﻿
﻿
Twelve acres of the VMI campus are designated as the Virginia Military Institute Historic District and are listed on the National Register of Historic Places. The campus is commonly referred to as the "Post" and cadets are housed in a large five-story "barracks." The Old Barracks, which also has been designated a National Historic Landmark, stands on the site of the original old arsenal. This is the structure that received most of the damage when Union forces shelled and burned the Institute in June 1864.
VMI was the last US military college to admit women in 1997.


Thomas Jonathan Jackson was born January 21, 1824. He lost his father and sister to typhoid fever and became an unwanted stepson to his mother's second husband. A few years later, his mother's health failed and just before she died, young Thomas was put into the custody of his birth father's parents. In 1842, at age 18, Jackson was accepted at West Point. Because of his inadequate early education, he had difficulty with the entrance examinations and began his studies at the bottom of his class. Thomas worked hard to absorb lessons. Displaying a dogged determination that would ultimately characterize his life, Jackson became one of the hardest working cadets in the academy. Jackson would ultimately graduate 17th out of 59 in the Class of 1846.

In 1851 Thomas Jonathan Jackson accepted a newly created teaching position at the Virginia Military Institute where he was Professor of Natural and Experimental Philosophy and Instructor of Artillery.  He was stern and religious and not a popular teacher. Jackson was often referred to as "Tom Fool" by the VMI students.  Parts of Jackson's curriculum are still taught at VMI today as they are regarded as timeless military essentials.

The only home Jackson ever owned is in Lexington. He bought it in 1859.  It is now a museum and has a nice side and back yard garden area.

Stonewall Jackson died May 10, 1863 after being accidentally shot at the Battle of Chancellorsville eight days earlier. His death was a severe setback for the Confederacy, seriously affecting soldier morale. 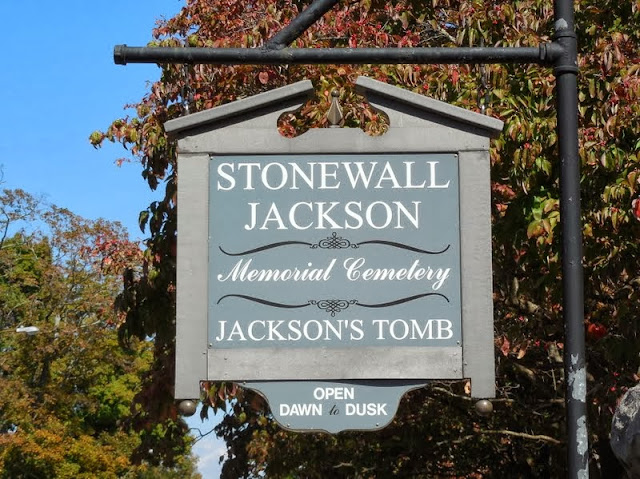 On May 15, 1863, Stonewall Jackson's body was escorted by the Corps of Cadets to his final resting place in Lexington.
﻿﻿


The "Lee" Part of Washington and Lee University


After the Civil War, General Robert E. Lee declined several job offers to serve as Washington College president.  Lee believed that in this job he could make a contribution to the reconciliation of the nation.  Lee's wife was a direct decedent of George Washington too. Lee welcomed the challenge of leading a college endowed by and named after the first president.

Robert E. Lee is the father of an Honor System and a speaking tradition at Washington College that continue to the present time. Ardent about restoring national unity, he successfully recruited students from the North as well as the South.

Lee died on October 12, 1870, after five years as Washington College president. The college's name was almost immediately changed to Washington and Lee University, linking Lee's name with Washington's. The university's motto, "Not unmindful of the future", is an adaptation of the Lee family motto.

General Lee and much of his family—including his wife, his seven children, and his father, the Revolutionary War hero "Light Horse Harry" Lee—are buried in the Lee Chapel here.

Robert E. Lee's beloved horse is buried outside Lee Chapel. The horse's life story and death are quite interesting.

We stayed in this area only a few days, fighting continually with the dreadful stink bugs that invaded our coach.
Email ThisBlogThis!Share to TwitterShare to FacebookShare to Pinterest