From Bella Terra of Gulf Shores, Foley, Alabama      Window installation began on Monday, August 7th. What a thrill. Here are a few of the most exciting pictures.

All casita windows except the small bathroom one will require hurricane shutters. The casita itself is built to withstand 140 mph wind. The hurricane shutters will be attached to the frame just below the small top window. I'm told they are heavy and difficult to install but look nice and are adjustable.

The shower stall was delivered Monday too. It's lying on it's stomach in the grass a and looks like a big dead elephant. It's embarrassing but I'll live with it.

The giant 8' front glass double doors and sidelights are expected to be delivered any day. Without the doors, the impending framing inspection will fail. David said today, however, that he will move forward with the framing inspection even with the failure to give Steve (the carpenter) time to remedy any other items found in the inspection.

Windows have been cut into the porch wall now too. These will have wooden louvers -- no glass and, of course, are not required to be hurricane proof. An "L" shaped bar will be built against the wall -- a gas grill will be on the side counter and an exhaust fan will be attached to the wall over the grill. 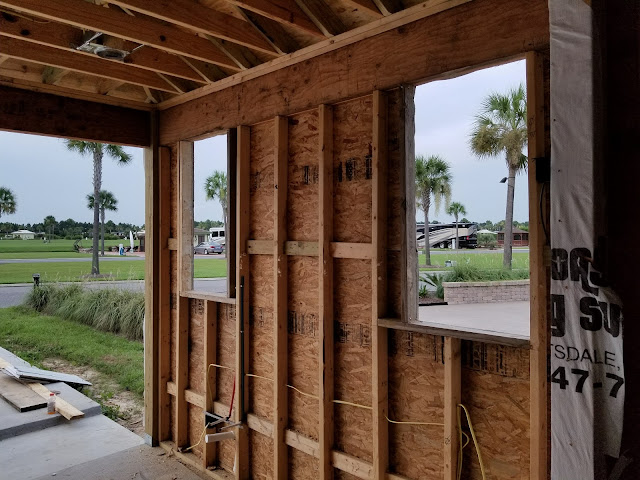 So this is our "look" for today, Tuesday, August 8. Metal roof installation is expected be complete next weekend.

I snapped the window pictures while Wayne waited in the topless car with the pups (in the picture below). Bless his heart, he is so "not interested" in the building process. Gnats were really bothersome so I hurried back for our late afternoon ride in his convertible. Gee he loves that little car. 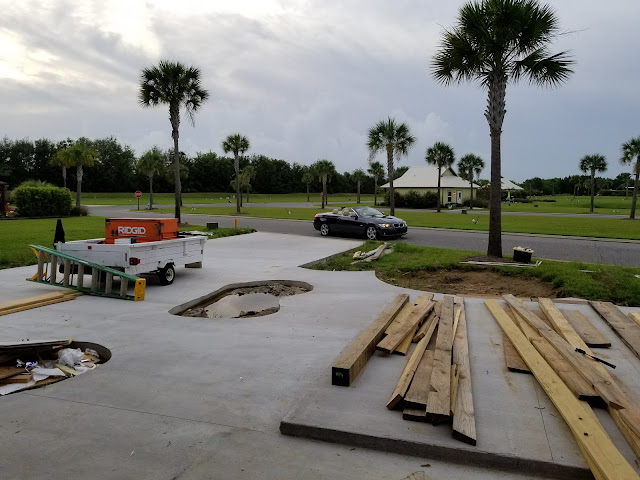 The shower stall was removed from the yard and installed in just a couple days. It's a tiny thing -- about the size of the one in the coach.


Then on Monday, August 14, the huge Gazebo kit was delivered. It is as large as a pickup truck! It will be erected on the raised pad at the bottom of the picture. The pad will be stained before the gazebo is built. 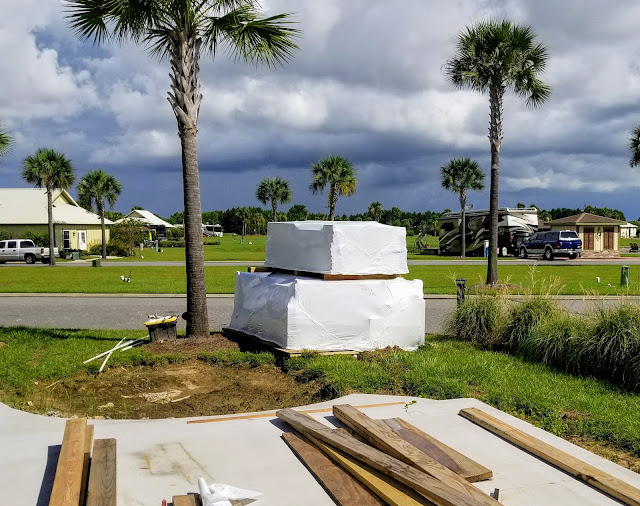 The roofers returned Friday and resumed the application of metal roof panels but it still is not complete. Wayne and I began looking around at furniture and appliances to get an idea of what we'll want to buy when the time comes for that important finishing expense... er... I mean "touch."