A Southern California State Of Mind

From Outdoor Resort, Palm Springs, Cathedral City, California         Our six week stay here is winding down. I am sad and really hate to leave. What a great place! What beautiful weather! Time has flown.

In addition to our visit to Joshua Tree National Park, the San Andreas fault and the Palm Springs Air Museum -- about which I've already posted, there were dozens of fun experiences I haven't recorded yet. I'll include some of them here.

As mentioned in an earlier post, we rented a golf cart to use in the resort and it was a good decision since the property is huge with 1,213 campsites, dozens of spas, pools and tennis courts, twenty-seven golf holes and two enormous clubhouses. Almost everyone here uses a golf cart for everything -- except golf as the courses are playable by walking only.

Pam and Ernie rented a golf cart too -- theirs from our neighbor Bob "Tex" Summers who, while he is retired a couple of times over, seems to always have a fleet of golf carts around and occasionally rents to people he gets to know and likes.

We've had lots of fun with Pam and Ernie's golf cart rental experience. The one in the picture above was delivered without notice on their first day in the resort. Two days later, Bob replaced it with another one that looks just like this except with chrome rims, seat belts and a better windshield. A couple of weeks after that, Bob exchanged the second cart for a third one... a snazzy silver job with over sized wheels and radio!  That one lasted but a few days because Bob sold it! The fourth golf cart has an air conditioner. I hope it's the last one they get because if there's another, I fear it will be a limousine.

We played some golf during our stay here, but not as much as I had hoped. The courses at ORPS are all walking courses -- one 18 holes; the other is 9 -- both par 3 courses. I try to be discreet but must take a few pictures while we play.

The four of us spent at least one afternoon looking at motorhomes around the Coachella Valley but weren't motivated to consider trading for anything we saw. It's always fun to browse though.

My birthday rolled around, as it always does during this month. We kicked it off with breakfast at Panera where I was surprised with the official birthday tiara, cards and a sweet little gift from Pam and Ernie.

My birthday celebration continued throughout the day and winded down with dinner at Shame On The Moon on Frank Sinatra Boulevard in Palm Desert. The restaurant's traditional menu was just half of the intrigue. The other half was the very obvious gay clientele. Never mind that.... I was the queen of our table... complete with tiara. 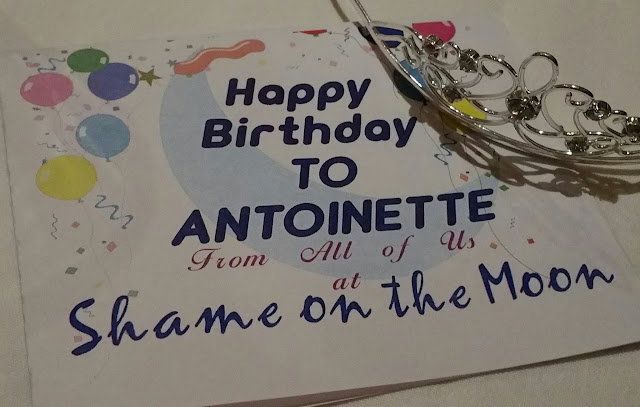 The four of us took a couple of pickle ball lessons here at the resort which was great fun until the afternoon temperatures reached upwards to the high 80's.

There are many casinos in the area. Pam and Ernie enjoyed a few outings but I don't recall a report of any great winnings.


In a recent post, I mentioned that we stopped in at the Yucca Palms Ford dealer on our way to Joshua Tree National Park to see a nice bright red pickup truck. That truck was a purchase for Pam and Ernie. Congratulations!

In mid-February we attended a show by Frankie Valli and The Four Seasons at Fantasy Springs Casino in Indio. Frankie Valli is now 81 years old, but his falsetto voice is still remarkably good... or maybe not. There are many (in seats close to the stage) who swear his part is not "falsetto" but "false" as in that it's mostly lip-syncing these days.  Our seats were terribly far back so we wouldn't know either way.

In other news.... Barack Obama came to Palm Springs in February to host a gathering of Southeast Asian leaders at the Sunnylands retreat in nearby Rancho Mirage which is, as the crow flies, less than four miles from our campsites here at ORPS. We heard the president stayed at Thunderbird Country Club, a community where former President Gerald R. Ford and his wife, Betty, owned a home.  Air Force One sat on the tarmac at Palm Springs Airport during the days of the visit -- posing for our photos, I think.


Outdoor Resort Palm Springs has been a wonderful experience during our six week stay - late January and all of February. Most of the people who come here are from the western side of the USA and Canada. Everyone here has been super friendly.


One day, during lunch at a local favorite, Babe's Barbecue in Palm Desert, we ran into a young man from our hometown in Tennessee. We enjoyed exchanges names and places with Jacob who came to southern California to pursue a career in comedy... for good reason. He was quick and witty -- also a good waiter.


In early February I resumed the morning walks I abandoned last year... again. During my walks, I pass pleasantries with so many walkers, riders, runners, dog walkers and golfers. The scenery is downright beautiful and I've captured so many fine photographs. Here's an example 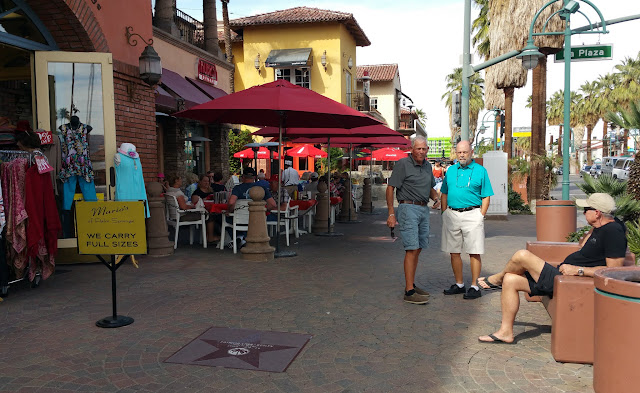 After hearing our friend Bob's recommendation, the four of us attended the downtown Palm Springs Street Fair on our last Thursday evening here in the Coachella Valley.  A light, early dinner upstairs at Matchbox kicked off a warm evening walk down the street which is now closed to vehicle traffic.

The Palm Springs Street Fair was very well attended. So well, in fact, that walking presented a challenge. Hundreds of booths selling everything from Artwork to Zamfir pan flute music. We tasted toffee, dates and rugula while we tested hand cream and air fresheners. Lamps and henna tattoos, rugs and hats, music and vacations were available to purchase. A bit of everything was there. We bought nothing but had a good time. The most amusing display was this very large man playing a base fiddle that had been severely altered. The music was weird but not as weird as the fellow in the suit.


We are down to the wire now but hope to return for another winter.
Goodbye yellow brick road.