From our relaxing, slow-paced days in North Fort Myers we made a mad dash to Prompt RV Screens in Winter Haven before they closed at 4 p.m.  Prompt RV Screen is not open on Saturday so to avoid staying around Winter Haven all weekend, we'd have to get there Friday. By mid-afternoon we had picked up our new 2-piece awning screen and a set of windshield wiper covers and were leaving town.

After spending one night in central Florida, we whiled away a few days around Titusville, visiting Kennedy Space Center on Cape Canaveral, touring the Merritt Island National Wildlife Refuge and driving around Cocoa Beach.

The Titusville, campground we had selected was completely full so we fell back onto our second choice in nearby Mims.  While the common parts of the campground were nice with newish buildings, tennis courts, hot tub and wilderness trails, the campsites in the section where we were parked were black sand and very little grass. Bummer. We'd stay just two nights spending the days touring.

Most of what we wanted to see was, naturally, along the coast and mostly around the area of Merritt Island National Wildlife Refuge.  On the way out, we passed the cruise ship terminals.

﻿
Merritt Island National Wildlife Refuge was established in 1963 as an overlay of NASA’s John F. Kennedy Space Center. Consisting of 140,000 acres, the Refuge provides a wide variety of habitats: coastal dunes, saltwater estuaries and marshes, freshwater impoundments, scrub, pine flatwoods, and hardwood hammocks provide habitat for more than 1,500 species of plants and animals.  We mostly saw birds as we drove through and this one was the best!


From the brochure I saw there are plenty of hiking trails at the Wildlife Refuge here.  Among them:

Haulover Canal, in the Merritt Island National Wildlife Refuge, has a nice Manatee Observation Deck. We stopped by for a look-see... but alas! not a single sea cow anywhere. 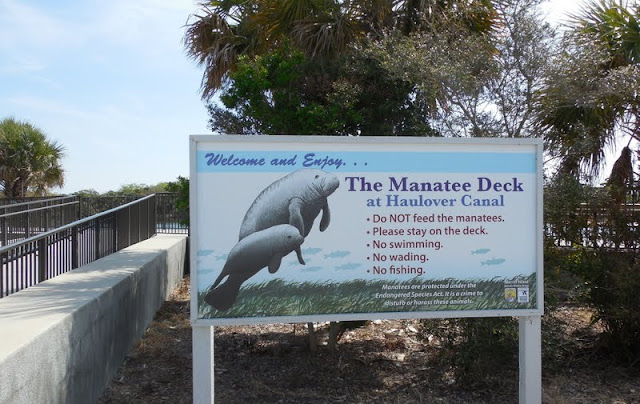 It's been well over 25 years since we've been on this part of Florida's coast and I did not remember it fondly for some reason. Can't remember why... it could be something as silly as bad weather.

When we were here way back then, the Ron Jon Surf Store was big -- but nothing like it is today.  The gargantuan building itself is fantastic with beach sport statues adorning the outside.  We didn't go into Ron Jon this trip. 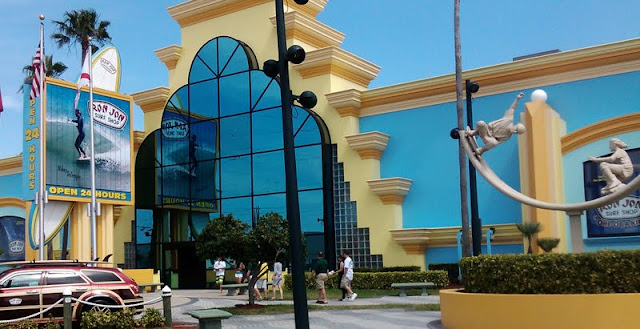 
General admission information suggested allowing 6-8 hours to tour Kennedy Space Center.  Wayne's never had much interest in the space program so he wasn't excited at the prospect. We did not tour the facility but likely will another trip to or from south Florida because it's something I'd like to do. Of special interest to me, though I don't know why, is the Astronaut Hall of Fame.  Having lived in Huntsville, the Rocket City, Alabama and visiting Huntsville Space and Rocket Center many times, I'm an easy touch for the $75 fee to take a guided tour of KSC.  And oh yes, RV parking is $15 a day--cars a mere $10.

From here, we expect to stop again between St. Augustine and Jacksonville for a refresher course in that part of Florida.  See ya there.