This post is tardy. Real tardy. As a matter of fact, I had completely forgotten two memorable events until I was working on a more recent blog story and ran across the pictures.

A few weeks ago, Ken and Nancy's friends, Jean and Ron, were wrapping up their week long visit when they decided to invite the West Side Trailerhood gang for dinner at Joe's Crab Shack in Fort Myers. A few carloads of us hauled our bottomless pit stomachs along for eats.  Gee, that's some surprise, eh?


A variety of seafood was ordered and most everybody enjoyed their dinner.  One notable exception, however, would be Janie, who was not amused at the difficult and time consuming task cracking crab legs for the tiny morsels of meat inside.  Unfortunately, I didn't get to capture her frustrated expression as she tossed the crab carcases into the bucket provided for that purpose. Nancy, who sat across from her at the table, told me about it later.


Wayne ordered a shrimp dinner and I selected crawfish ettoufee and both were excellent.  I should point out that Joe's Crab Shack had $2 hurricane's the night we were and they were really good too.


Being the kind who just itches to break the rules, Mark insisted he take his beer right to the edge. We made a special trip outside... to the restaurant porch for this one.

Later that week, I had the thrill of holding Ellie Mae, a Capuchin Monkey who lives in the campground.  Anxious to get a picture of her, I ran outside with my camera.  Who knew she would leave her pop's shoulder to come visit with me?  How exciting!

These next few pictures of Ellie Mae and me are displayed in proper time sequence.  Notice I look nervous in the first one.  Yes, I am a little bit afraid of monkeys.  Someone standing close by took my camera to snap these pictures. 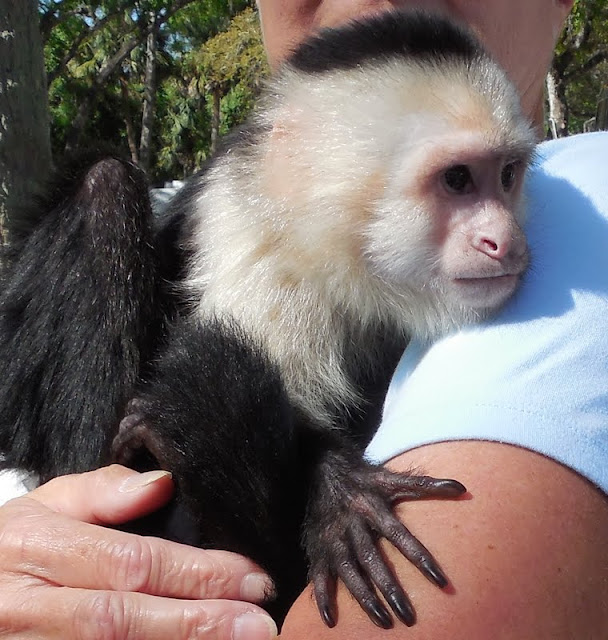 As unique as she is and as strange as it seems, Ellie Mae is not the only unusual animal guest in and around our campground.  One photo I didn't catch was the colorful parrot who rode through the campground on the handlebar of his owner's bicycle.  He was always talking as he passed.

﻿
Sadly, we had an pet death in the campground during our stay.  Maxwell, a 14 year old Schnauzer, became ill suddenly and upon advice of the attending veterinarian, was euthanized.  A few weeks later, Max's parents found Joshua.

Our time at Seminole is winding down and we'll be saying some sad farewells soon.  What a fun time we've had here but our feet are starting to get the travel itch again....
Email ThisBlogThis!Share to TwitterShare to FacebookShare to Pinterest