In late December 1835, the United States, in an effort to remove a group of native Seminole Indians from their Florida homeland to a reservation somewhere out west, suffered a surprise attack here in Bushnell.  A group of 107 soldiers, led by Major Francis Dade, was moving from Fort Brooke (now Tampa) eastward to Fort King (now Ocala).  The weather was cold and so, after many days without sighting any Indians, Major Dunn's soldiers put coats over their guns.  They didn't realize that some 200 warriors, led by Micanopy, Jumper and Alligator, were hiding in the nearby palmetto brush. The attack left 103 of the 107 soldiers, including Major Dade, dead on the field here in Bushnell. This action would bring the United States into the costliest Indian war to that point in time.

Having lived in Florida (including Dade County) for so many years, one would think we would have heard something of this battle and the history of the name "Dade" -- but we didn't and all of this was new information to both Wayne and me.

Our campground bears street names of this historical battle, including Dade, Micanopy and others. We learned of the existence of the battlefield, read up on the attack and took an afternoon to explore. 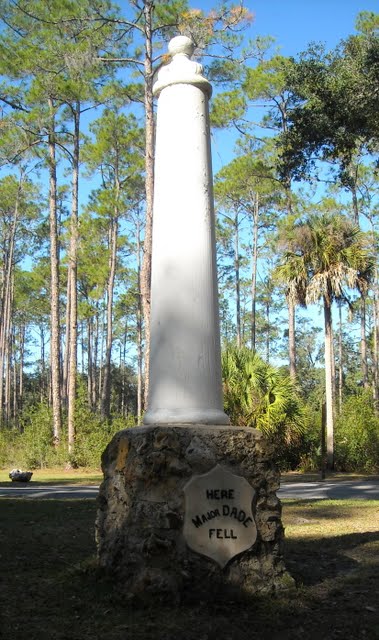 Of course, Lexie and Ozzie were with us and they seemed to enjoy their stroll through the beautiful setting of old Live Oak.

Returning to the campground, we drove through the historical downtown area of Bushnell. The town is small and quaint.