From Chula Vista Resort and Marina, Chula Vista, California      This area of coastal California has a very efficient, well-maintained, inexpensive and easy-to-learn rapid transit system. Wayne and I have very little experience in using mass transit but Pam Ernie blazed a trail for us on the day we went into San Diego for our USS Midway Museum tour. 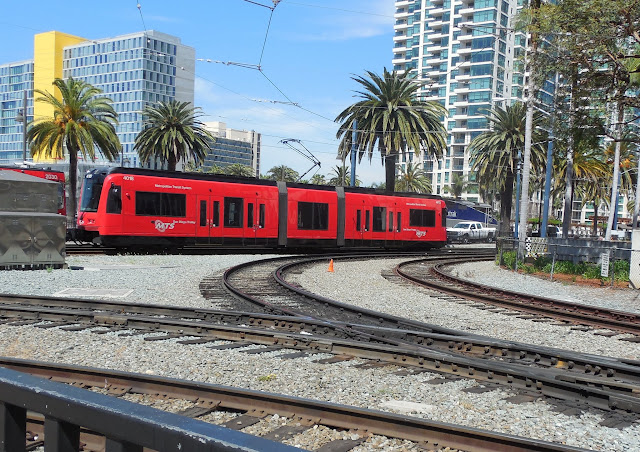 USS Midway (CVB/CVA/CV-41) is a carrier of the United States Navy. She was commissioned a week after the end of World War II and held the record as the largest ship in the world until 1955.

In the spring of 2011, our last visit here, Wayne and I marveled at the gargantuan memorial from street side. Today we'll take the tour.

The USS Midway Museum houses more than 60 exhibits including 29 restored aircraft. There is a self-guided audio tour which we did not purchase. Two flight simulators were swarmed by long lines of thrill seekers... we didn't do that either.


The day of our visit just happened to be within one of the several "spring break" weeks so families were plentiful aboard ship making my photography efforts especially difficult.  Kids do love military stuff it seems.

This is an especially good photo, not just because our friend Ernie is in it and not just because it's lunchtime. It's special because it contains the USS Theodore Roosevelt in the background and the famous "Unconditional Surrender"statue over Ernie's right shoulder. The wonderful stage salute to Bob Hope is also barely visible on the point.

Pam, Ernie, Wayne and I enjoyed lunch aboard ship from the Fantail Cafe actually dining on the elevator deck. The air was brisk, the sun was warm and the views were incredibly spectacular.
While the children, foreign visitors and family crowds created some chaos during our lunch, we enjoyed a surprise encounter with a 90-something year old Pearl Harbor veteran with whom we enjoyed a long chat. His nephew, a retired Navy pilot, and niece invited him to San Diego for the upcoming Easter weekend and to tour the USS Midway.

USS Midway saw action in the Vietnam conflict and served as the Persian Gulf flagship during Operation Desert Storm in 1991. This behemoth, too large to navigate the Panama Canal, operated for an unprecedented forty-seven years before being decommissioned in 1992.  Midway is the only remaining U.S. aircraft carrier of the World War II era that is not an Essex-class carrier (according to something I read).

Here are a few of my best photos of the Midway flight deck.


Mid-afternoon came around as the four of us concluded our tour of the USS Midway. Our next destination is directly below -- the Midway Park area where we'll see "Unconditional Surrender" and the salute to Bob Hope before rewarding ourselves with a drink in the restaurant bar before heading home.

Leaving the pier where the Midway is docked, we came upon this black granite memorial wall to sailors and ships of the U.S. Navy. In the photo above, Ernie stands beside the inscribed section of the wall that memorializes his father's ship, the USS Gambier Bay. 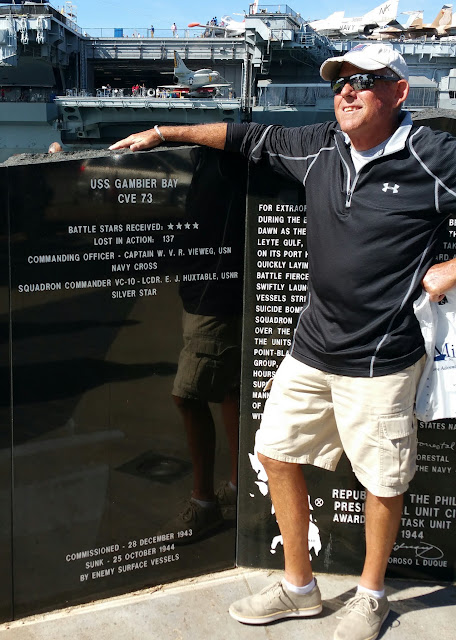 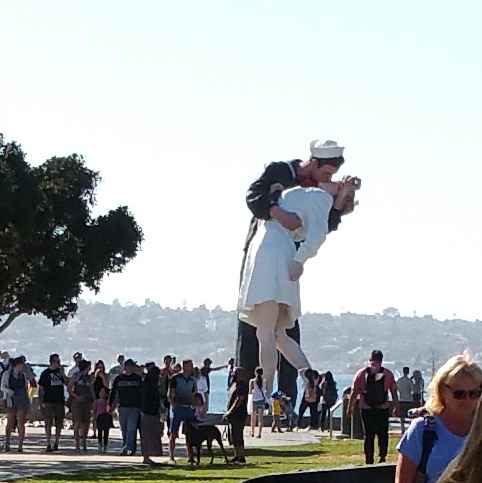 Another great day with friends. Gotta run now to catch that Trolley!