From Gulf State Park Campground, Gulf Shores, Alabama        Pam, Ernie, Charlie, Wayne and I played golf a few times at the state park course during late November. The five of us went to a golf clinic one afternoon and we got in some practice another day.  Looking back, I wish I'd taken greater advantage of the driving range and putting green at Gulf State Park's Refuge Course. I could sure use the practice. It was only about three miles from the campground. Such good hindsight.

Over the first weekend in November, friends San and Teresa drove up from Orlando to meet our group and discuss the trip to Alaska next summer. Sam and Teresa are considering going along and I think they would be a good fit. Teresa is scheduled to retire from her long working career as an CRNA at the end of January. It had been four years since we'd met them in Bradenton, Florida and our visit was good, but short. Unfortunately, I failed to take a single picture of them.

I bumped into a school mate in the campground during November. As often happens, strangers pass pleasantries and after a bit of conversation, surprise themselves when they learn of a common connection. Turns out Mike and I attended high school together. He was two grades behind me and I don't really remember him, (nor he me) but we had lots of common school friends, recollections of high school, it's people and events. This is a small world.

Pam and Ernie introduced us to McGuire's Irish Restaurant and Pub in Pensacola in November too. This is the place that advertises a famous Senate Bean Soup for 18c a bowl and yes, that is the price shown on the menu. It is said there are millions of dollars stapled and taped to the inside of McGuires and I believe there could be well over a couple million dusty, moldy, nasty, old $1 bills. The restaurant is a museum of a place with dark stairwells and corridors. It is a treasure to visit.

McGuire's is recognizable by the old double decker buses on the corner near the restaurant. It is filled with animated manequins. Wayne and I had seen the busses and the building over the years when we were in the area, but had not had occasion to stop at McGuires until today.


When we needed a good half-way lunch place to meet up with our friends Sandy and Dave, we naturally chose McGuires. Sandy and Dave are considering a travel rendevouz with us for some spring travel but aren't interested in the Alaska trip this year.

The eight of us visited over our lunch and then drove to Joe Patti's World Famous Seafood Market for a few pounds of shrimp and fresh fish.  Dave and Sandy are staying at Emerald Coast RV Resort in Panama City, Florida and say they like the campground so we'll add it to our list of Gulf Coast campgrounds to consider in the future. 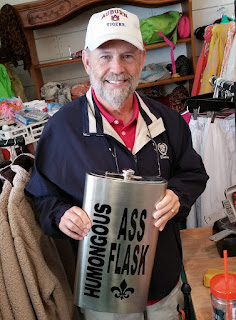 Joyce, Charlie, Wayne and I strolled the streets and scoured the shops of The Wharf at Orange Beach shopping area on another afternoon.

Most of the shops are overpriced and competing for the tourist dollar but we did find a few treasures, including a piece of sea glass for Joyce.

Wayne found something he liked too, but he didn't buy it.>>>>>

We stumbled upon a pretty good Mexican Restaurant for lunch and later noticed newly decorated Christmas trees in the roundabout where two Wharf area streets intersect.

In addition to a steel mast rigging and the Christmas trees, a big metal fish just called for us to take a few pictures. Of course, we did.


On our way back to the campground that afternoon, the four of us stopped in for cocktails at Pleasure Island Tiki Hut on the waterway. 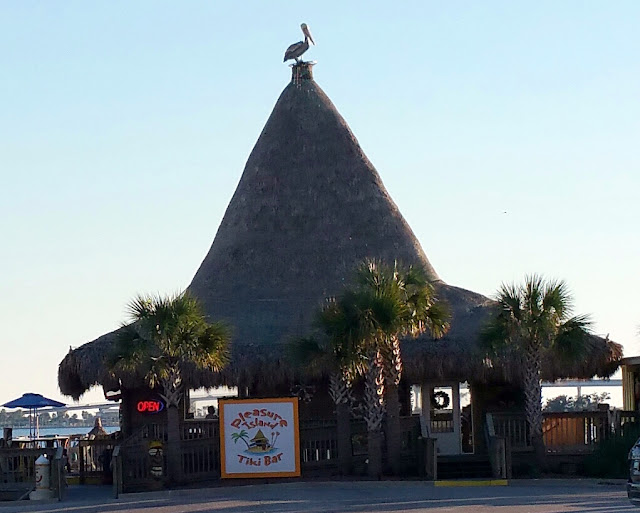 November is winding down. There are a few more "tourist" things we want to do.