A Second Helping of Fairhope With A Sprinkle of Point Clear

From Gulf State Park Campground, Gulf Shores, Alabama       In 2007, Southern Living Magazine named Fairhope, Alabama the "second best small town in the south".  Pam, Ernie, Charlie, Joyce, Wayne and I liked the area so much we returned on November 28th to see the sights we missed on our first visit nine days earlier.

This trip would take us first to Rotolo's Pizza in Fairhope for light lunch using the free appetizers coupons we were given at the Oyster Fest earlier in the month.  We wanted to be hungry when we went to Peter Blohm's restaurant, Sunset Pointe at Fly Creek Marina, for dinner.

After lunch we drove to the Municipal Pier and garden area where Lexie and Ozzie ran without leashes on the grass and we took dozens of pictures. These are some of my favorites.

Across the street and up the hill from the municipal pier and garden area, we walked among the memorials at Henry George Bluff Park....


... Then across another street to Utopia Park where Joyce liked this giant steel seahorse so much she managed to lift it first onto her shoulder and the up... up... up... and over her head.  I told her I'd take a picture if she could do it. 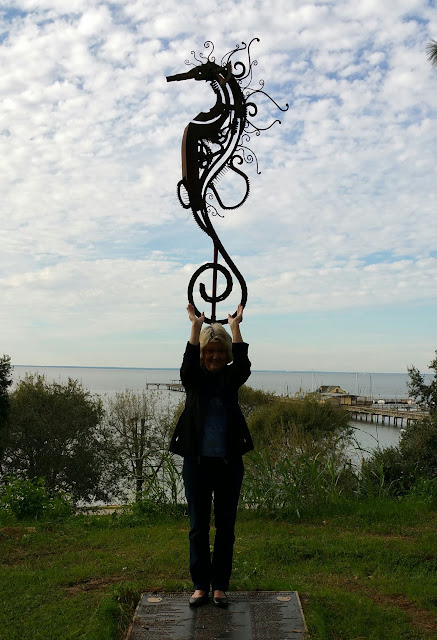 Down the street and into South Beach Park....

Another beautiful spot on Mobile Bay's eastern shore is Point Clear where the famous Grand Hotel, now owned and operated as a Marriott Hotel property, has stood for more than 165 years. That's where we headed next. There is a great history to this land and facility that dates to 1847. Originally, a two story hotel, it had just 40 rooms. Guests arrived by a steamboat that docked in the area that's now the hotel's marina.

A bit of history..... The port of Mobile, Alabama was a favored site for blockade runners in the Civil War. In 1864, the battle in which Admiral Farragut made the famous proclamation "damn the torpedoes, full speed ahead", Confederates bombarded the Union army with torpedoes and sunk the mighty Union ship, Tecumseh. The Grand Hotel was fired upon by Farragut's army during that battle and later a large hole would be found in one of the hotel walls. This battle would ultimately force the surrender of Fort Morgan by the Confederates.

The Grand Hotel served as a hospital and more 300 Confederate soldiers died there. The soldiers are buried in a mass grave, shoulder to shoulder. Their names are unknown today as records were destroyed in a fire during 1869.  A monument to the unknown was later constructed at the cemetery. It is still there today. Unfortunately, we didn't have enough time before dark to see the cemetery, which is probably the most meaningful site on the property to me.

In World War II, the Grand Hotel property was turned over to the Army Air Force to use as a Maritime Training School with hotel floors referred to as "decks" -- time was kept by a ship's bell.  More than 5,000 servicemen were trained on the property.

To this day, The Grand Hotel honors the American military in all wars with a processional that begins in the hotel lobby, weaves around the grounds and concludes with the firing of a cannon at 4 p.m. It was an awe inspiring thing to see... and hear. Loud. Very loud. 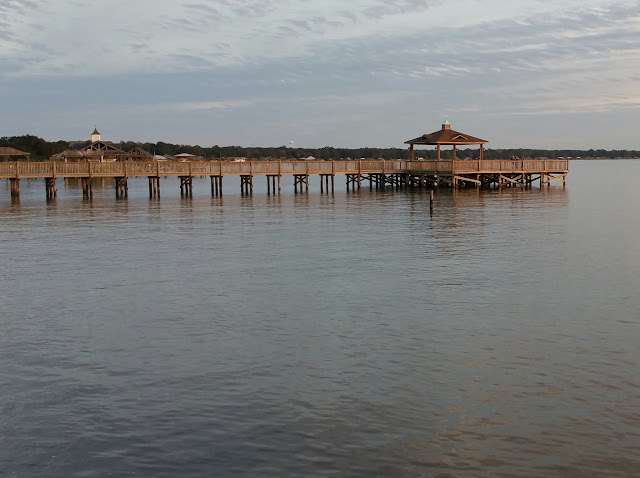 The Grand Hotel still honors "tea time" every afternoon at 3 p.m. when tea and cookies are served. We all indulged.


From The Grand Hotel, we backtracked to Sunset Pointe at Fly Creek Marina north of Fairhope for dinner which was very good except that during dinner we received news that Pam's Mother had become ill and was taken to the hospital. Fortunately, she began improving quickly and is recovering at this writing.

Thanksgiving is almost upon us. We have a full day planned starting with late morning mimosas, a bit of photography and dinner reservations at Shipps Harbor Grill in Orange Beach.
Email ThisBlogThis!Share to TwitterShare to FacebookShare to Pinterest