On Sunday, March 22, with another winter season behind us, we left Seminole Campground and North Fort Myers. Leaving this year was especially difficult as our tentative plan for next winter will take us elsewhere. Wayne and I said our goodbyes with hopes of seeing this group again but the fall plan to meet in the D.C. area isn't really likely for us. We promised ourselves we'd never again risk a stink bug infestation like the one we got in that area during the late summer of 2012.  We will see how it goes.

Our drive today is just up I-75 to Lazydays at Seffner, Florida, just outside Tampa off I-4. At the RV Show in January, we scheduled new carpet installation through Wade RV, a vendor located on the Lazydays property. Carpet covers just the floor of the slides in our coach. The main floor is tile. We learned slowly, and a bit too late, that Lexie's separation anxiety causes her to ruin the carpet. After several intense scratching sessions, the carpet frays and she eats the fibers.  It's not all carpet that Lexie destroys... just the kind with a bit of nap. Low nap rugs and carpet are safe from the intense scratching.  There are three places that are damaged but could be repaired.  But the carpet has packed terribly so we opted to just rip it out and get something we like.

Holger Jensen of Wade RV estimated a total less than $1,200 to have the carpet on the slides replaced and have a custom entry mat and five step covers made.  Seemed reasonable so we're here to get 'er done.

Before leaving Tampa in January, we selected carpet. It wasn't exactly what we wanted but would do. In February though, we were notified the carpet had been discontinued and a second choice would have to be made. Photos sent to us didn't work out so we planned to select a carpet from a local carpet wholesaler when we arrived in Tampa.

We were instructed to check-in at Lazydays Campground and Holger would secure a discounted rate for us during the five days we would be there. The desk clerk laughed when we told her that. We paid the regular rate.

Our week long stay at Lazydays Campground was pleasant enough, due in large part to the good location of our site which was on directly in front of the meeting center that made for good dog walking. We got to see all the arrivals and departures and that in itself can be quite a show. We also enjoyed complimentary breakfast and lunch during our stay.

Upon seeing this rig pull in to Lazydays Campground, I learned all about the Acro-Cats a group of trained house cats. There's a whole array of You Tube videos featuring this group of rescued cats. In one of the videos the AcroCats woman was raising money for some engine repairs on the rig. Hopefully, she was able to get those repairs done during this stay. I did not get a chance to meet or talk to her.

Bright and early on Monday morning Wayne and I were off to the carpet wholesaler where we had a harder decision selecting carpet than we ever expected. We leaned toward a commercial type carpet instead of the traditional residential deep pile rug we were replacing. I was secretly glad the original carpet order was interrupted. Finally we settled on something that, while not in this location, was available from another warehouse.  Next day, when Holger went to get the carpet, however, it was not there which was devastating news to me. I wouldn't settle for anything else so by the end of the day, the mysteriously lost carpet reappeared and is scheduled for installation by Friday.

Meanwhile, Holger's entry mat guy measured the cockpit of the coach and the steps. To our surprise, the mats would be made and installed the next day. In fact, the whole job was completed within the five-day work week. 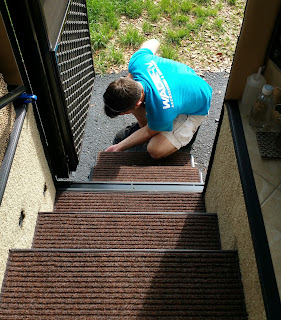 After all was said and done, the original $1,200 estimate had swelled to $1,700 which displeased us but Holger's January estimate had been verbal so we didn't have anything to dispute. I learned too late that far too much carpet had been ordered and paid for by us.  A huge amount of our carpet was left over. So much in fact, that I had most of it be loaded into our car when the job was complete.

The new carpet is just what we wanted, so in the end, I'm glad the original carpet was discontinued and that we went through the pain to get one we liked. The next week, that roll of leftover carpet was successfully made into one large living area carpet, three runners and a small bathroom rug. I ordered a product named InstaBind, watched a video and did the whole job myself.