I am at least full three months behind in posting.  There's good reason for it though -- my brother's critical illness. A great effort is underway to catch up... a little bit at a time, beginning with this first installment.

Our awning repair in Mount Vernon, Washington was completed on Wednesday, August 13. The very next afternoon I received word that my brother was hospitalized, seriously ill with a poor prognosis. With the awning repair out of the way, there was nothing to keep us in the Pacific northwest, so we arose on Friday morning, August 15 (my brother's birthday), requested a medical emergency refund of our final three paid days at the campground, pulled up stakes and began the 2,600 mile trip southeast to North Alabama.

The route we selected was fairly direct but diverted us a bit from previous trips, taking us through places we vowed we'd return to visit.  There was simply no way we'd stop or waste precious time. Spectacular scenery was passed up as we inched our way across the country. At the end of the first day we had not even gotten out of Washington state. Traffic in the Seattle area had been horrendously slow. We spent the first night at a Walmart parking lot in Spokane.

The second night was also spent at Walmart. This one in Butte, Montana. The third night we stopped at Indian Campground in Buffalo, Wyoming, allowing us to relax in a long shower, eat a proper dinner, do a sink full of dishes and wash a load or two of clothes. So far, the trip was pleasant and uneventful.

One of the many pretty sights along our trip was Chimney Rock in southeast Nebraska. It was late in the day when we approached it and I managed to capture one of only about three pictures of the entire trip. I knew I would later regret not taking more photos, but my heart simply wasn't into sightseeing or even the travel. I only thought of my brother. 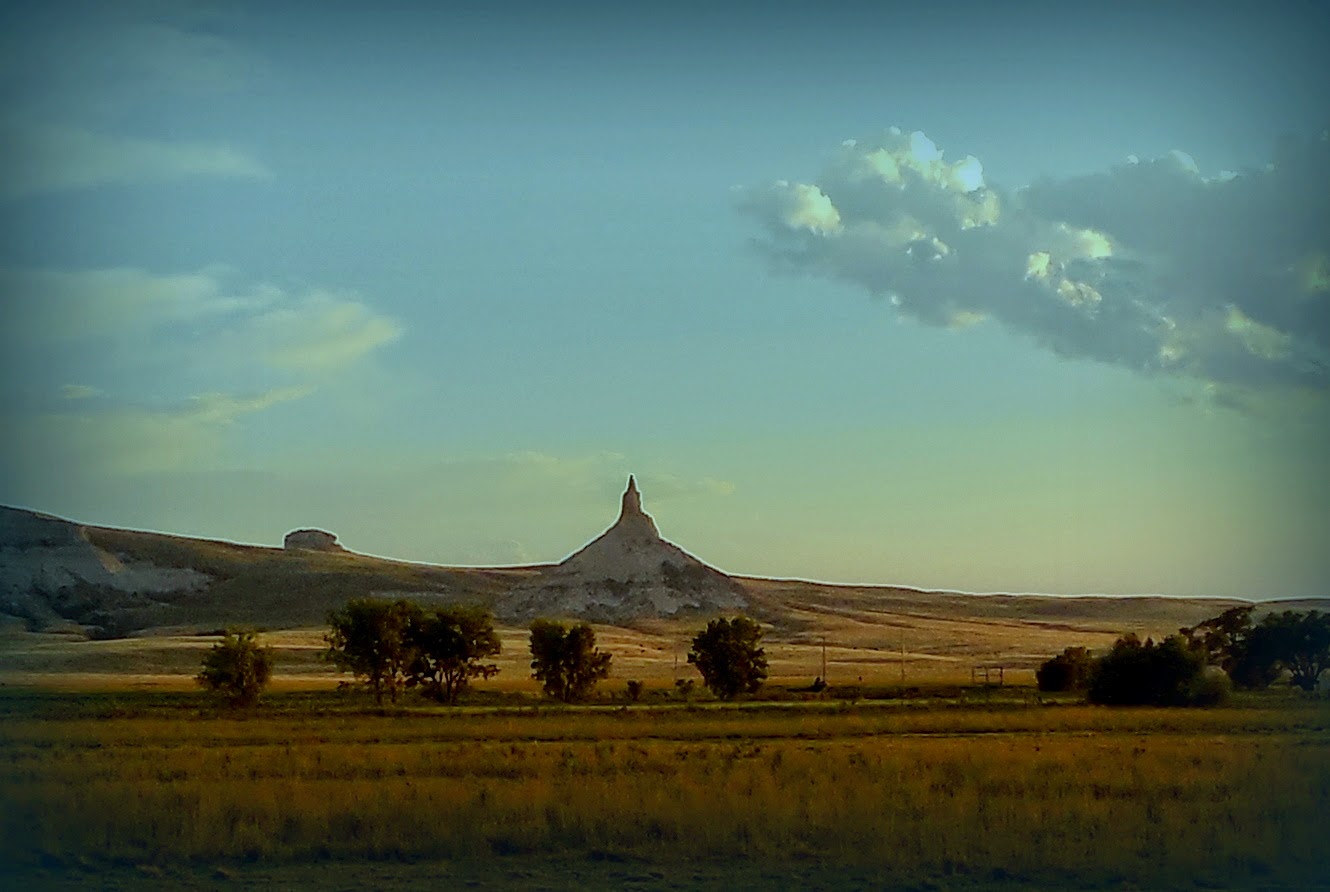 Being great fans of the movie "Lonesome Dove", Wayne did want to be sure we went through Ogallala, Nebraska (mentioned frequently in the movie). There was nothing in Ogallala but now we can say we've been there. I took no pictures of it.

The fourth night was spent in another Walmart parking lot. This one is North Platte, Nebraska. It was about here I realized we were traveling eastward along the "westward trails" commonly referred to as the California, Oregon, Morman and Bozeman Trails. They followed the North Platte River. More splendid scenery.  No pictures of any of that either.

The fifth morning, leaving North Platte, Wayne became uneasy about the wear of the coach's front tires. These are the Goodyear tires that came new on Endie (2011). There's less than 20,000 miles on them but they've begun to "cup" even though Wayne takes care to watch them, rotate and have the front end aligned as needed. In Lincoln, Nebraska on the fifth day, new Michelin tires were mounted late in the day. We stayed in an overpriced campground in Lincoln. Early next morning, the new tires were balanced, the front end aligned and we were back on the road before noon.  Later Wayne was unable to locate his best reading glasses. He left them on the counter of the tire store. One of the tire salesmen mailed them to us at my brother's house.  .

Daytime temperatures were in the 90's by this time and that makes it too hot to stay overnight without all night air conditioning.  At Higginsville, Missouri, we stayed at the Great Escape RV Park.

The route we'd chosen would take us through St. Louis, which ordinarily wouldn't mean much, but in early August, the shooting death of  a teenager in Ferguson, Missouri resulted in violence in and around that area.  I checked the map to see if we could route away from the city's center and avoid the affected area. This part of the trip was the on the seventh day.  Seeing the news helicopters on the outskirts of the city reminded us of the nearby unrest. 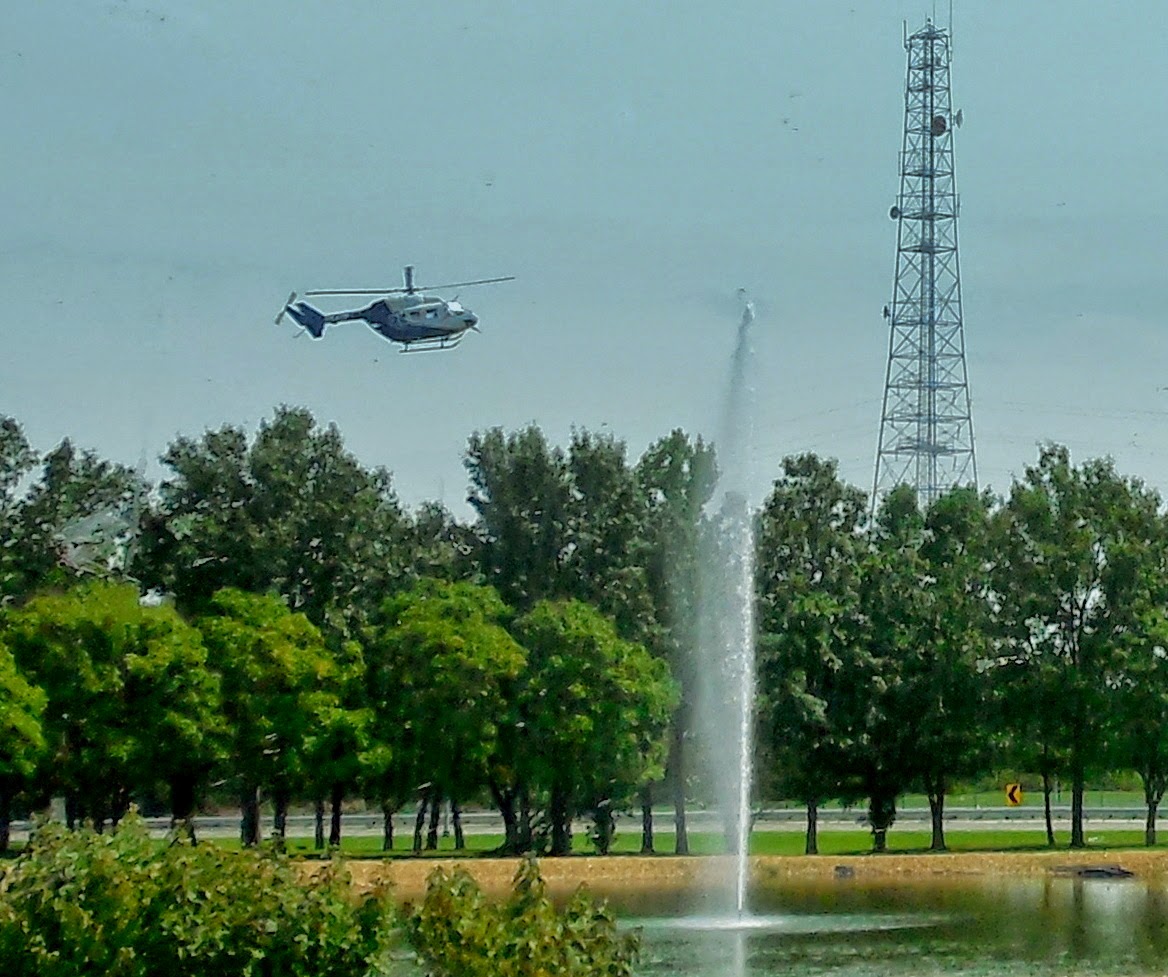 The GPS route took us along the southern perimeter of St. Louis where we avoided the area of Ferguson and got a good view of the St. Louis Arch and Busch Stadium.

Calvert City, Kentucky hosted us at the end of our seventh travel day. The marathon is beginning to take it's toll and we both were glad to know we'd reach our destination the next day.

By early afternoon on the eighth day, we arrived in New Market, Alabama. The County Park Campground doesn't accept credit card reservations so I sent a special request to my very good high school friend asking if she'd be willing to make a quick dash over to reserve a spot for us at Sharon Johnston Park Campground. Thanks to Marilyn, we had a site reserved for the upcoming weekend.


By the time we reached our destination, my brother had been discharged from the hospital and was home. We found him sitting outside, thin and frail, but cheerfully waiting for us to arrive.  I was so happy.

I didn't know what was next though.
Email ThisBlogThis!Share to TwitterShare to FacebookShare to Pinterest