Everyday Life In The Campground

Camping here is simply delightful. Large, quiet, shady camping spaces and miles of walking trails, though I'm not doing any of that these days. It's still summer and quite hot so I happily use it as an excuse. Most daytime highs reach near 90. Whew.

The camera made it's way out of the drawer again one day while Wayne washed the car. I snapped a few pictures of our surroundings.  During this, the very hot part of late summer, few locals come here to camp. Most of our neighbors are here for construction work assignments.  One would be hard pressed to find more than just a couple of people on the grounds any weekday afternoon. Lexie and Ozzie frequently go out unleashed -- though they don't really know what else to do except follow Wayne and me as they would if they were leashed.

The only negative I can report on this campground is the proximity of two shooting ranges. With hunting season coming up, we found the frequency of gunshots increased with each passing week.  Ozzie is afraid of loud noises, so it was troublesome for all of us to hear the target practices late in the afternoons and on weekends.
This is the log home of the original settlers of this area, built in 1883. It was donated to the park by the family's descendants and is scheduled to become an important historical part of the park.

The adjacent county park has a very nice marked 5K walking / running track that goes along the outside edge of the campground. It is frequented, most every afternoon, by local high school runners.  The picture below is a part of the track where we can see them from our campsite several hundred yards away. 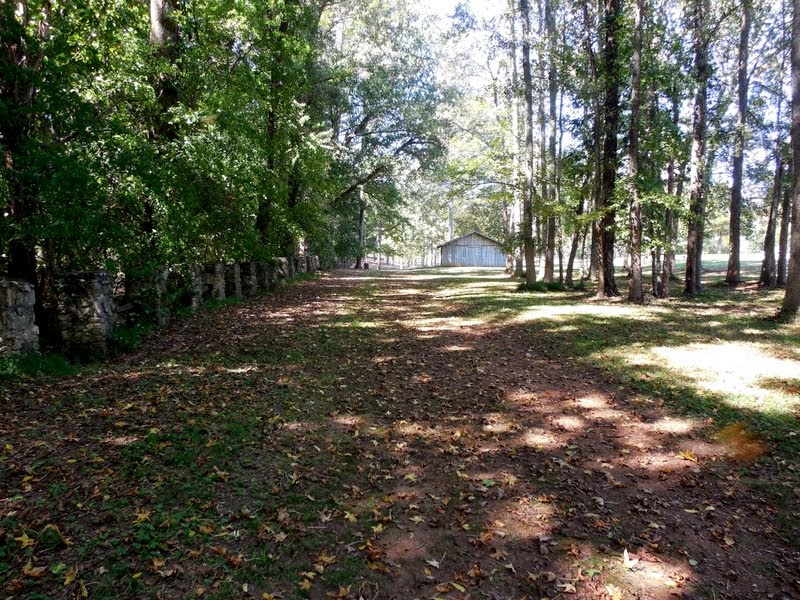 The park also has a nice twelve acre fishing lake that's restocked with catfish annually. While many folks from up north won't eat farm fresh catfish... well... I'm from the south and I can appreciate the delicacy of a golden fried catfish fillet and a plate of hush puppies.


This is the third installment of posts I'd neglected during the time of my brother's recent illness.

September brought a couple of setbacks for Macky. He was in and out of the hospital several times. A reaction to one of his medication's landed him him there for more than a week with huge areas of bloody red splotches all over his feet and lower legs. Seems he just can't catch a break and I find myself expecting the worst at any time.