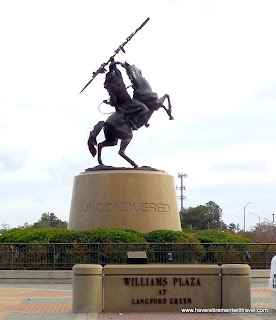 Yesterday, we took a 120 mile round trip from our campground at Carrabelle Beach to Tallahassee where we made our first visit ever to the campus of Florida State University.

The FSU campus is lovely, plenty of trees and while you're there it's easy to forget you're in a state's capitol city.

After a bit of exploring, we found beautiful Doak Campbell Stadium where the Seminoles play football. We parked at Moore Athletic Center and strolled around, taking a few pictures.


Then this morning, we took Lexie and Ozzie across the street for a walk on the beach.  Dogs are welcomed on the beach here, though leashes are required.


After a little while, we let Ozzie off the leash so he could run in the sand...and he did. He's such a funny little guy. He runs like an antelope and makes quick stops and starts, kicks sand and spins around.

Lexie can't be released as we're afraid she won't let us pick her up if a threat occurred.

It is a public beach after all. 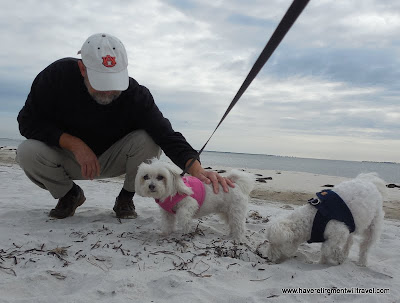 Only one person passed us on the beach during the hour we were there. An older woman strolling the beach in a heavy overcoat.


From the beach we took the pups back to the coach to brush the sand from them. Both had managed to get sand all over their faces, legs and tummies.

Once the dogs were cleaned a bit and Ozzie had time to finish his breakfast leftovers, we loaded into the car for a short ride to Apalachicola for oysters.

It took about a half hour to reach Apalachicola from Carrabelle Beach.  Wayne has been waiting in happy anticipation to have oysters. Having given up raw oysters many years ago, he's reduced to eating only cooked ones these days.

Papa Joe's is certainly not a fancy, or even a nice, restaurant.  It's a waterside "dive" for oyster eaters. Molded plastic tables and chairs, cheap paneling and dirty windows adorn the "patio" dining area. It's one of those places where you don't really want to touch anything except the food and you just try not to think of how the kitchen must look.

The town of Apalachicola is as nautical as I'd dared hope it would be. Because today is Tuesday, the day after Veteran's Day, and it is cool and overcast, there are really no crowds.  We spent a couple of hours exploring the town made famous by the lowly oyster.


Downtown, we came upon a cute little shop called PETunia... for pets and their owners. That's where I found this terrific door mat.  There were three really funny ones. It was hard to choose...

Returning to Carrabelle Beach we took the short detour across the bridge to St George Island where we were found the St. George Lighthouse.
﻿﻿﻿﻿

I've been seeing these signs. Never thought about bears being here. Looks funny to see a "bear warning" sign alongside a beach....


Our time at Carrabelle Beach is winding down. In a few days we'll be moving along.
Email ThisBlogThis!Share to TwitterShare to FacebookShare to Pinterest