Auburn's hideous 2011 football season prompted an early departure from the Loveliest Village this year. Two home games remain and ordinarily we would stay for both of them. We decided, after the second week at Chewacla, though, to move along to Florida -- our winter destination.

Carrabelle Beach is our first stop where we're staying at a nice RV Resort directly across US 98 from the Gulf of Mexico.

This area, east of Apalachicola, southwest of Tallahassee, is known as Florida's Forgotten Coast and prides itself on being "away from the hustle and bustle" of tourist crowds.

It does look forgotten -- even a bit neglected. There are lots of dilapidated houses, boarded up businesses and buildings for sale.  We've seen plenty "bank owned" properties. Between the bad economy and the Deepwater Horizon BP Oil Spill, it's no wonder things look so bad here.

Shrimp boats, fishing charters, marinas and rental cottages are seen in the communities here. Long stretches of tall pines grow along the roadways and I really like the "sleepy" look of things.


I'm trying to resume my morning walks and it's easy to do here at the beach. Not surprisingly, the beaches here are near white, sugar sand. 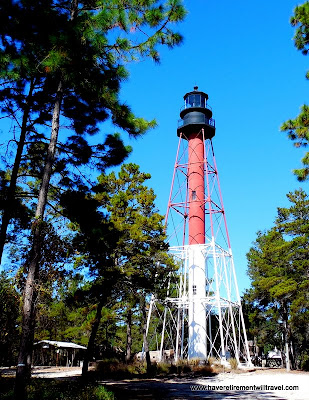 Tupelo Honey:  Luckily, we're in Tupelo honey territory and I replenished my supply from a roadside stand yesterday.  My friend Tom introduced me to this delicious sweet nectar two years ago.

Tupelo honey is produced from the White Ogeechee Tupelo blossom  that grows around the Ogeechee, Apalachicola and Chattahoochee river basins in northwest Florida. These river valleys are the only place in the world where Tupelo Honey is produced commercially. Bee hives are placed along the river's edge and bees fan out through the surrounding Tupelo-blossom-rich swamps during April and May and return with nectar to produce their liquid treasure.


Pure Tupelo honey is amber colored with a slight green cast.  It is a choice table grade honey with a delicious flavor and delicate taste. Only honey produced from the White Tupelo will not granulate. Due to it's high laevulose, low dextrose content, doctors recommend it to some diabetic patients.
The World's Smallest Police Station: Carrabelle is the home of the "World's Smallest Police Station". In 1963, prompted by unauthorized long distance calls on the city's police phone, the booth was first installed. Eventually, to completely eliminate the costly long distance calls, the dial had to be removed from the phone inside the booth.

The Carrabelle Police Station has been featured on television shows "Real People", "Ripley's Believe It or Not", "The Today Show", "Johnny Carson".
﻿
Life has not always been a barrel of laughs for the old St. Joseph Telephone and Telegraph Company phone booth. Vandals have ripped phones out of it and have shot holes through the glass. Some idiot from Tennessee (not us, I promise) tried to load it into his truck to take it home.
Monster Truck Alert! And now, for my final entry into the Carrabelle Beach post, I'll include this  truck photo.  Evidently there was some kind of mud slinging rally for such vehicles near here last weekend. This one was parked near our rig.  Ummmm. I'll report, you decide. 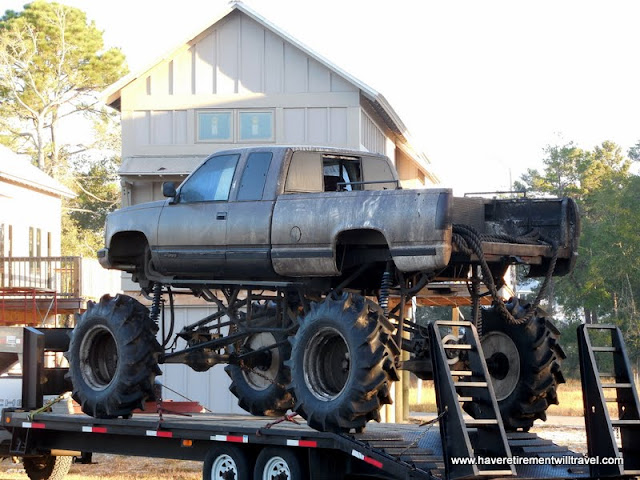 We're looking forward to a ride to nearby Apalachicola for oysters soon.  I'll let you know how it goes.  Wayne loves oysters -- I'll have an order of shrimp, please.
Email ThisBlogThis!Share to TwitterShare to FacebookShare to Pinterest