My Visit to the Dentist 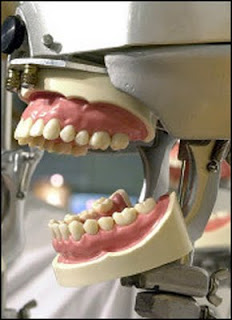 Another pre-retirement item checked of the list. Dental checkups. We feel fortunate to have found a dental group we like. Doctors Brent Miller and Thomas Lokensgard at McKay's Mill here in Franklin. I went in for a routine cleaning and to chat with the dentist about his recommendations to be sure my teeth are healthy for the long term. We decided the old silver fillings had to go. They would be replaced by nice, new, white resin ones. Seven really needed to be changed. Two more weren't too bad. I'd come back Wednesday morning early to get it done.

On arrival Wednesday morning, I decided to go ahead and get all nine fillings replaced. It took about 2 hours and at least five of those really nice injections somewhere between my gums and lips. When I left, I couldn't speak and wouldn't regain that ability until nearly dinnertime. A "mirror check" was frightening. My mouth drooped uncontrollably.

I finally took aspirin and went to bed. Yes, to bed. Not just a couch nap;
I mean getting up under the electric blanket in the darkened bedroom. When I awoke at 4:15, I could form words but the tenderness in my right jaw had begun to show signs of brusing. I enjoyed a nice cup of bean juice and soft biscuits for supper.

Today, Thursday, I can eat soft food but the bruise on my right jaw is really big, dark and sore. Wayne's been sympathetic because he knows his appointment is on Monday.
Email ThisBlogThis!Share to TwitterShare to FacebookShare to Pinterest