Making The Best of Hurricane Evacuation

From River Town Campground, Vicksburg, Mississippi      This is where we stopped in our hurricane evacuation.  Not so much as a drop of rain or a puff of wind was noticed here last night while Hurricane Nate came ashore near Biloxi late in the evening.

We arrived around 4 p.m., hot, sweat, tired and stressed. The campground has gravel roads which Lexie and Ozzie simply cannot walk on, but the campsites are clean, open, quiet and right on Highway 61, just south of Vicksburg. The bedroom slide struggled to go out so we just left it in and worked around the lack of space. It's probably going to get worse and we certainly don't want to get stuck here in need of a major slide-out repair.

Wayne's clothes had been soaked and dried in perspiration at least two times today but he insists he isn't as tired as he looks. The worst part of the day for him, I think, was missing the 11 a.m. Auburn / Ole Miss game. He did catch part of it on the coach radio as we rode. It was a nice 44-23 win for the home team.

Our plan had been to explore Vicksburg -- something we hadn't done since our automobile visit here in the early 1990's. We have good memories of that time and thought it would be fun to do again.

But the heat and stress took more out of us than we realized. Sunday morning came and neither of us had an appetite to unhook the truck in the sweltering heat. Even the thought of touring the civil war battlegrounds and the historic city couldn't motivate us. Instead, we watched hurricane coverage on television and stayed inside the coach. 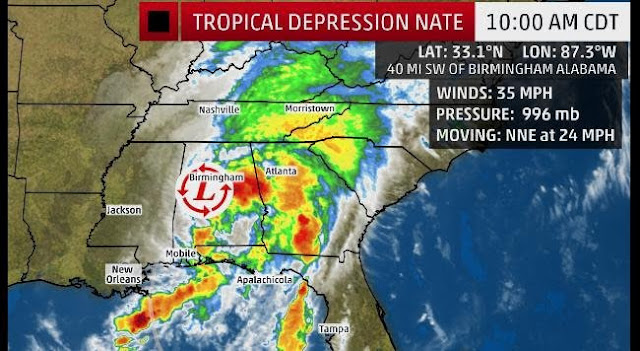 We did stay a second night but headed back to Foley Monday morning.  While we didn't encounter rain evacuating on Saturday, we certainly got our share going back today.  It was nice to settle back into our sweltering temporary campsite at Bella Terra around 3:30 Monday.

I am really tired of hurricanes. We've wrestled with some measure of worry over four systems that affected our area this season.  T.S. Cindy, Hurricanes Harvey, Irma and now Nate.