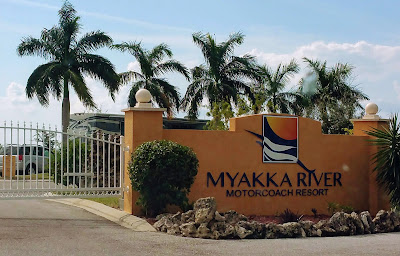 In nearly seven years of full-time RV'ing Wayne and I had never committed to a five months stay in one location. We did this winter though -- November through March.  Ray and Cindy Fleishel recommend Myakka River Motorcoach Resort to us a few years ago. This would be our first visit. Wayne thinks we're staying too long but I feel pretty good about the decision as I am eager to relax for a good long while.

Pam and Ernie already had reserved their winter site for six months at Cypress Woods RV Resort in Fort Myers. Joyce and Charlie would make a last minute decision to stay at Seminole Campground in North Fort Myers. Wayne and I are about 40 minutes north.


Neighbors to our road side checked in just ahead of us, Tony and Cathy and their friend Larry.
They are from Louisville, Kentucky and travel together. We met them the first afternoon.

Cathy and Tony have a Maltese named Scooter. He bites. Larry is a widower and travels alone.


Our site is across the bridge in the photo below. We are between two of the three lakes.

I liked MRMR immediately. It's restricted to motorhomes and has just 99 sites. The developer/owners live on site. I had read nice comments about the park, its owners and the community. Far enough from the crime and crowds of Fort Myers, Port Charlotte has everything we want for a winter visit, including plenty of shopping, a good assortment of restaurants, a nearby Publix and lots of golf.

A casual "Meet N Greet" is held on the Sunset Balcony every Friday afternoon, during season, at Myakka. The balcony overlooks the large beautiful pool and deck and offers a fine view of the river and sunsets. During Meet N Greet, wine and German beer are served compliments of the German owner, Ralf and his wife Amber. There's always a little something to snack on too, but the best part is that almost everyone in the park attends, wears a name tag and has a good time. We rarely missed a Friday evening Meet N Greet. Here are some of my early pictures.

The huge crowd won't arrive until after Christmas so there are lots of vacant spaces in the resort during November and December. It was easy to remember names when there weren't so many at one time. We made a point of trying to meet everyone.


Several social gatherings were scheduled during November, including a neighborhood progressive eating social that called for everyone to walk around the resort, meeting others and eating.


Thanksgiving Dinner was the first formal gathering in Myakka's clubhouse. Bruce took pictures and sent this one to me.

I'm glad he did because I didn't take a single photo.

There were hundreds of beautiful sunrises and sunsets during our months at Myakka. The weather was extremely dry and hot though. Our patio faced the south and was almost always really warm. 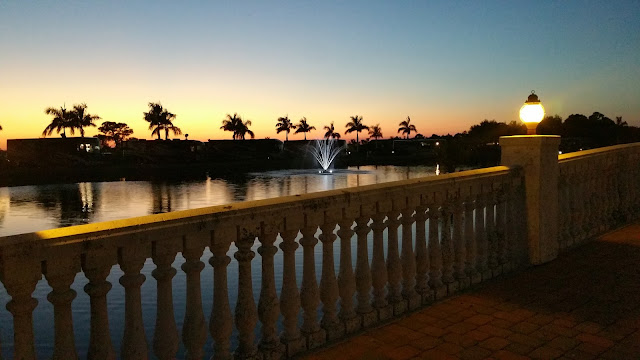 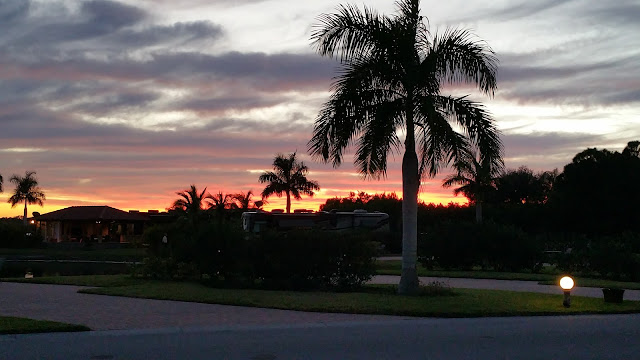 It was good to see Ray and Cindy again.

We rarely see them and it's usually for short periods of time. This winter though, they were already at Myakka when we arrived and they remained another month after we left at the end of March. 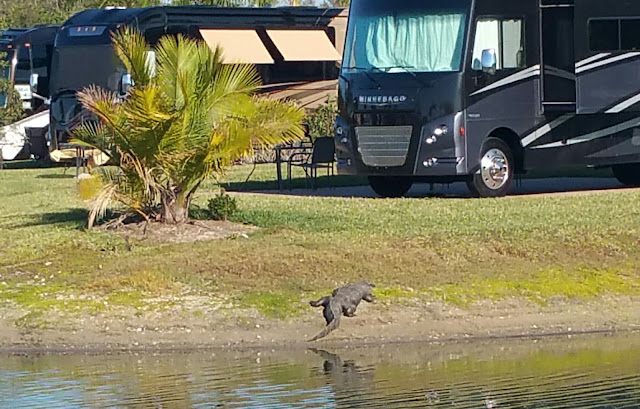 By the time Christmas rolled around, we knew almost everyone in the park. Our Christmas dinner and dance party was well attended. The food was good and so was the entertainment.


As an "ice breaker" at the Christmas party every year, each table of eight people is required to sing, at the microphone, the Christmas carol of their choice. Someone at our table suggested "Jingle Bell Rock"... and we did! It was the first time I'd ever sung kareoke and I had great fun though it's hard to tell from this picture.

There was no turning back after the Christmas carol ice breaker. Everyone took several turns singing and dancing broke out almost immediately.  I think I've found my talent. Well.... maybe not.

Myakka also hosted a nice New Years party, complete with fireworks at midnight but we didn't attend. Ozzie got scared of the early party neighborhood firecrackers and we couldn't leave him.