From Bigfork Motorcoach Resort, Bigfork, Montana        It's been four years since Wayne and I saw Glacier National Park the first time. A mere 40 miles from Bigfork, we couldn't pass up a second day trip there with Tom and DJ.

The weather forecast called for overcast skies, a slight chance of rain and a chilly high of 69 degrees in Kalispell. It would be much cooler still at Glacier.  We all dressed accordingly, except Tom, who wore shorts, of course.  By 9 a.m. we had stopped at the local Subway for sandwiches and were headed north toward Columbia Falls and Glacier National Park. Lexie and Ozzie went too, snuggled in their bed between DJ and me in the back seat of the truck. 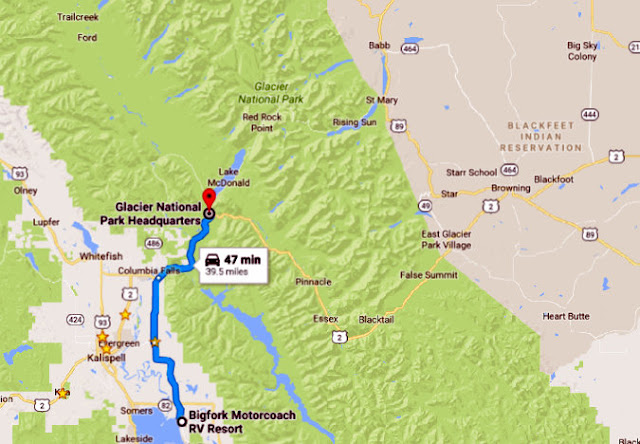 The ride north on U.S. Highway 2 took us through some fabulous scenery at Flathead National Forest to the east.

Entering at West Glacier on U.S. 2, our national park visit started at the West Entrance and Park Headquarters where we mapped our route.  Next was Apgar Visitors Center. We stopped for information there before setting out toward Going-to-the-Sun Road north along the eastern shore of Lake McDonald. Fog could be trouble for us today. Rain too.

These "Red Buses" are from the 1930's and are part of the earliest history of Glacier National Park. The full fleet numbers 33 and is considered to be the oldest touring fleet of vehicles in the world. The buses have roll-back tops for vertical viewing through the park. We did not opt for the Red Bus tour. We have dogs.

DJ and I walked the grounds around Lake McDonald Lodge and peered into Russel's Fireside Dining Room which was not yet serving customers. 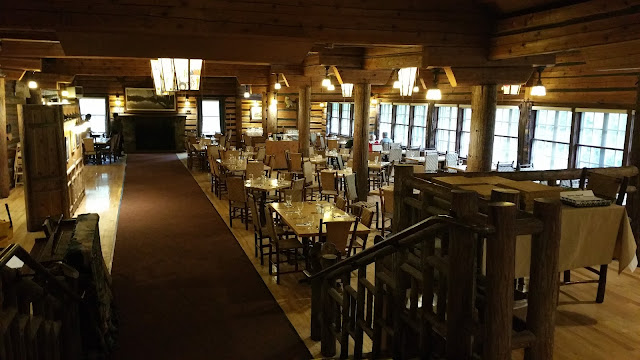 It was downright cold on this damp, overcast day so my excursion around the grounds of was shorter than I would have liked. I rejoined Wayne and Tom in the truck and soon, DJ emerged and we continued our ride.

The 50 mile Going-to-the-Sun Road bisects the heart of Glacier, and hugs the cliffs just below the Continental Divide. It was harrowing at some places. 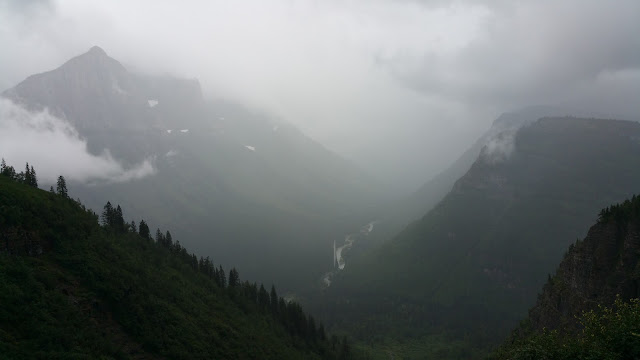 The air got cold and the fog crept onto us as we eased our way up, up, up into the mountains. Every stop for picture taking was colder than the one before. We finally reached Logans Pass Visitors Center where I thought surely we would freeze. Ozzie and Lexie stayed snuggled their bed under blankets while we four ran through freezing rain to the jam-packed information center and the all important restrooms. 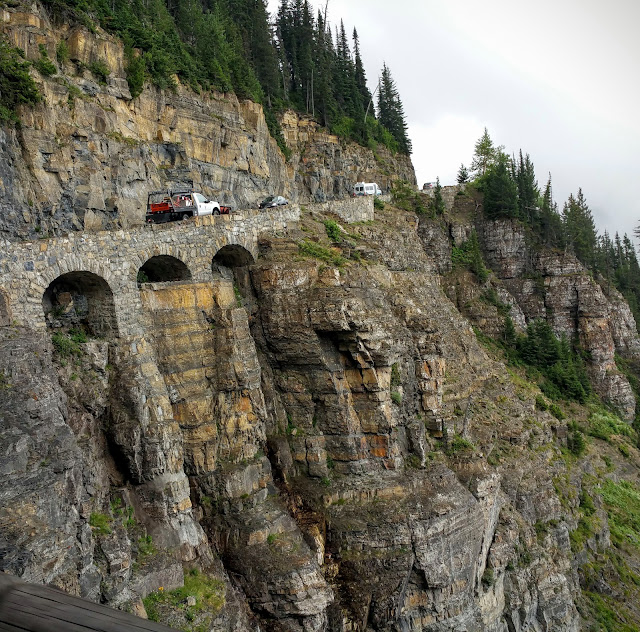 We all were a bit disappointed but visibility was just too poor to proceed.


We returned to the truck and inched our way back the way we came through thick fog.

The good news is that we were on the inside lane of the road coming down. A bit less scary.

Back at a reasonable elevation, we came into a group of shops where we devoured the Subway picnic sandwiches we had brought along. Tom located a store selling hot chocolate. Yum. Warming to those chilled bones.


We browsed the shops but made no major purchases. Before leaving the area, we snapped the picture at the top of this post.

Meanwhile... back in the truck. Two furry troublemakers destroy a Glacier National Park brochure and a plastic bag in protest of being left behind.

So we made our way back to Bigfork, where the weather was splendid. The four of us ate dinner at Bigfork Brewing Company again. Nice to be with friends.