Waiting for the slide cover to be delivered to Columbia Camper, we enjoyed fall at Long Branch Corp of Engineers Campground at Center Hill  Lake over the long Columbus Day Weekend.  Leaves were colorful and nightly temperatures were very cool even though the days were still very warm.
We had a nice time at Long Branch but are anxious to get the repair finished so we can move along toward Auburn for October football. Kim called Monday afternoon to let us know the part had arrived and we scheduled a couple of hours to get them done. Meanwhile our mail and some Ozzie's new blue Snuggie (to match Lexie's pink one) had also arrived. Kim and Larry are so good to accept our deliveries and hold them for us.

Even after the repairs were finished, we stayed on in middle Tennessee for a week.  On Saturday we'd visit with Wayne's cousin, Betsy and her family who were on a whirlwind trip visiting Vanderbilt with their son, Matt.
On Sunday we loaded Mona and Blackie and went to see my brother and his family. It's been three years since I've seen him. We stayed two nights at a county park campground in New Market, Alabama and enjoyed two dinner visits with them.

With the weather quickly turning from beautiful and warm to cold and rainy, we left New Market on Tuesday morning.  We drove along I-565 through Huntsville to I-65 south headed to Birmingham.
Being brought up in the south, brown and white speckled cotton fields are not an uncommon sight.  But after being away for such a long time, it was nice to see them again and I decided they were photoworthy.  Same for the soybeans.
Anxious to get out of town before the rain arrived, we drove through Huntsville quickly. I managed to snap these shots of the Space and Rocket Center as we drove by.  I take a lot of these nice things for granted, but a long visit in Huntsville will go on my bucket list for next time.  I'd like to see some of the places we lived and take a day visit to the Space Center.


Our next stop is to visit with Wayne's aunt Helen and her group in Birmingham. From there we'll finally get to Auburn -- we think.  Arrival at Oak Mountain State Park Campground was earlier than anticipated so we were able to get with Helen for a visit the same evening.
We took Lexie and Ozzie with us to Helen's. This is the first visit we've made with the two of them so I was a little bit apprehensive. Helen was completely unconcerned and she was right. The three of them played all over the house all evening. I tried to capture a video but couldn't keep up with them. Helen's tiny back yard is completely enclosed and at one time, she opened the door and the three dogs came and went as they liked.  It was a good night everybody had a good time.


The next day we met Helen at Pelham Civic Center where Lynn and Jay work. The complex houses two ice skating rinks and a nice banquet facility.  Lynn gave us a nice tour of the building and the kitchen where we found Jay hard at work on a Chamber of Commerce luncheon. 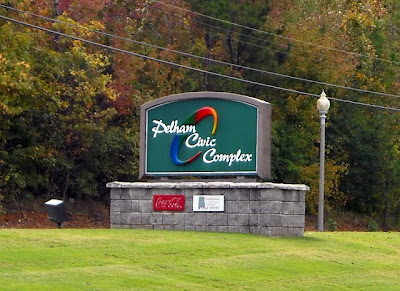 After our tour of Pelham Civic Center, Helen, Wayne and I drove to Ballentrae Country Club for lunch.  The food at Ballentrae is catered by Lynn and Jay too. It was a "first visit" for all of us to the club.  Lunch was very good and we enjoyed the really cool, slightly overcast weather.  That evening, Jay and Lynn came by Helen's where we had Chinese food for supper. Of course we left Birmingham the next morning with our refrigerator loaded with delicious leftovers.

Our next stop is expected to be Wind Creek State Park in Alexander City, Alabama. It's only a few miles from Auburn where we hope to be early next week.  Helen, Jay and Lynn will join us for the Auburn / Ole Miss game.  Can't wait.
Email ThisBlogThis!Share to TwitterShare to FacebookShare to Pinterest